In the Eye of the Cyclone

Things are broken all around, but they are also patched up so fast and so big that we are led to believe there is a kind of normality settling in. Mind you, people are even starting to book their 2021 summer holiday as if it is a necessity right now.

Yet, I feel that we are just in the eye of the cyclone, a place which feels sheltered from recent devastation, but a place which only exists for a few moments. A few more days, weeks or months. Still, when we get out of the eye, we hit devastation again. It cannot be avoided, can it?

Sell in May and Go Away. Well, not this year... There is just one more week to go, and the stock market is defying gravity once more. Like when the oil price crashed a few weeks ago and Mom and Pop rushed to buy it at $0.1 per contract, the same Mom and Pop are now buying option contracts on various US stocks to chase the price of "recommended stocks" to infinity and beyond. History tells us time and time again, that Mom and Pop are the ones getting hit by their FOMO. 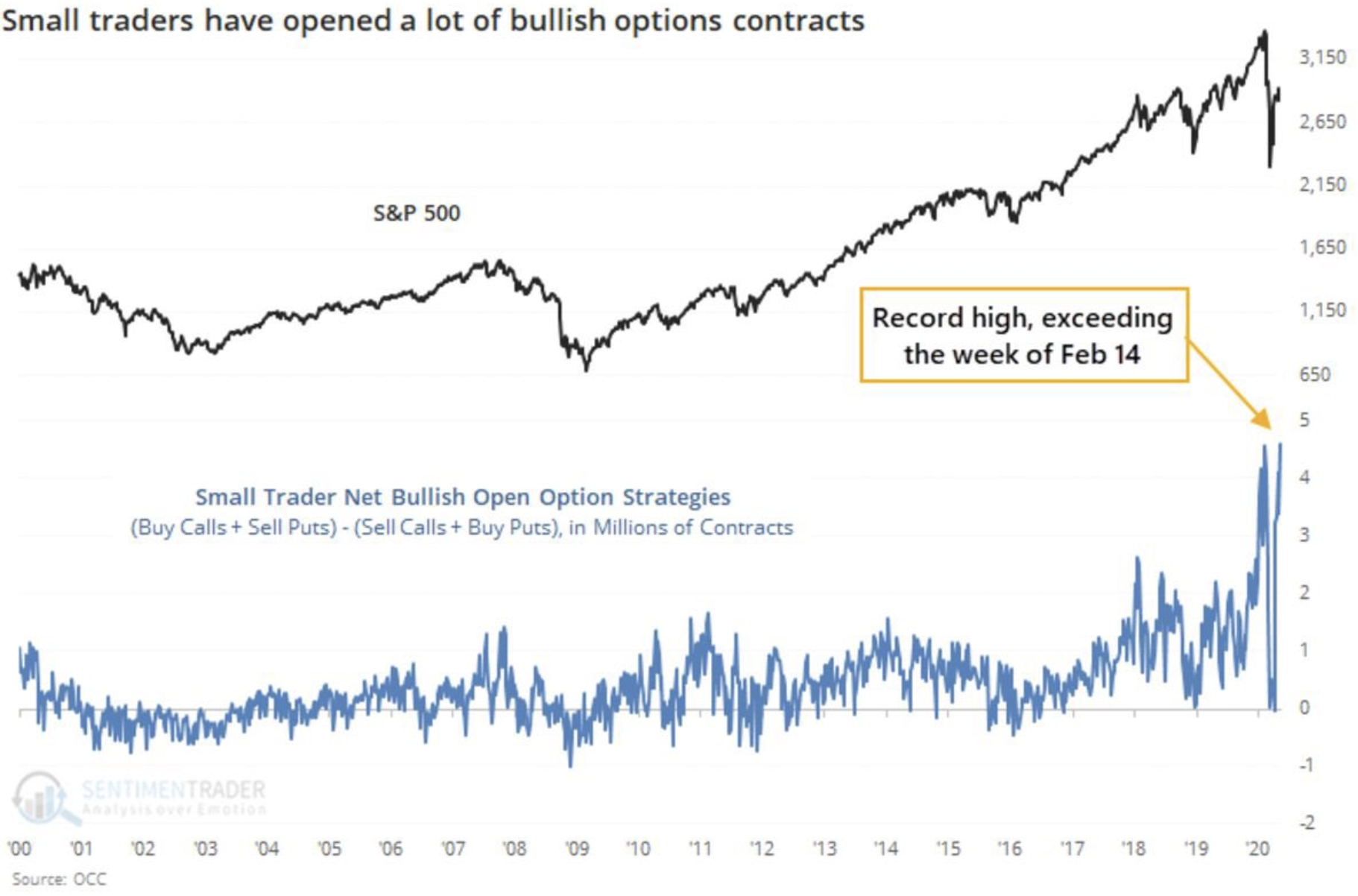 Indeed, this is generally a sign that worse things are about to happen soon, at least in the financial world, if not yet in the real one. There are other indicators telling us a similar story. The famous US Equity / GDP ratio, otherwise known as the Warren Buffet indicator, flashed disaster at the top of the Internet Bubble in 1999, and then again earlier this year before the plunge. With an upcoming GDP in freefall and a stock market resolutely up up up, guess what, this indicator is at an even worse reading now than before the pandemic started to hit the markets.

The thing is, there is so much disconnect between price and value, that we have difficulty to assess where we are vs where we should be. The Central Bank monsters are responsible for this. In fact, if we look deeper into the past, we see that since the 2008 financial crisis, we have entered a new era. The previous era, which we can trace back as far as the post 1945 end of war, was one of relatively high GDP growth, slightly descending but averaging between 5% and 2.5% growth at worst (the blue line).

The new era is not just one of GDP growth below 2%. It is an era of manufactured GDP. The FED has started printing money in such a way that the shift of era cannot be missed. There was before 2008, and there is after 2008. More money put in circulation for less and less growth. Mind you, the graph below does not depict all the money printing, only the small slice of new money in circulation (cash and cash equivalent). The other part of the money printing, the debt, is more towards the $7tr than the $2tr limit of this graph. It is this explosion of money printing which leads to the disconnect between price and value. As a consequence of the Central Banks' so called Quantitative Easing, we do not know what is the correct correlation between price and value anymore.

But the thing is, in terms of how far the FED and the ECB are from completely losing control, well there is possibly more bad news. They could still be printing a lot more before completely losing it. Earlier this year, I wrote an article called the Autopsy of Zombies. It is even more relevant today. See the graph below. The Bank of Japan and the Swiss National Bank have both lost the plot nearly a decade ago. They are printing money non-stop, way beyond their nation's economic power, and they are buying anything they can put their hands on. ETFs (total control of their national market by the BoJ), FAANG stocks (certainly AAPL for the SNB), there is even the rumour that after the WeWork disaster, the BoJ could even buy into SoftBank. Giving bungs to friends, like the ECB did with the wealthiest French Billionaire a few months ago, that's how desperate the situation is when they lose control... 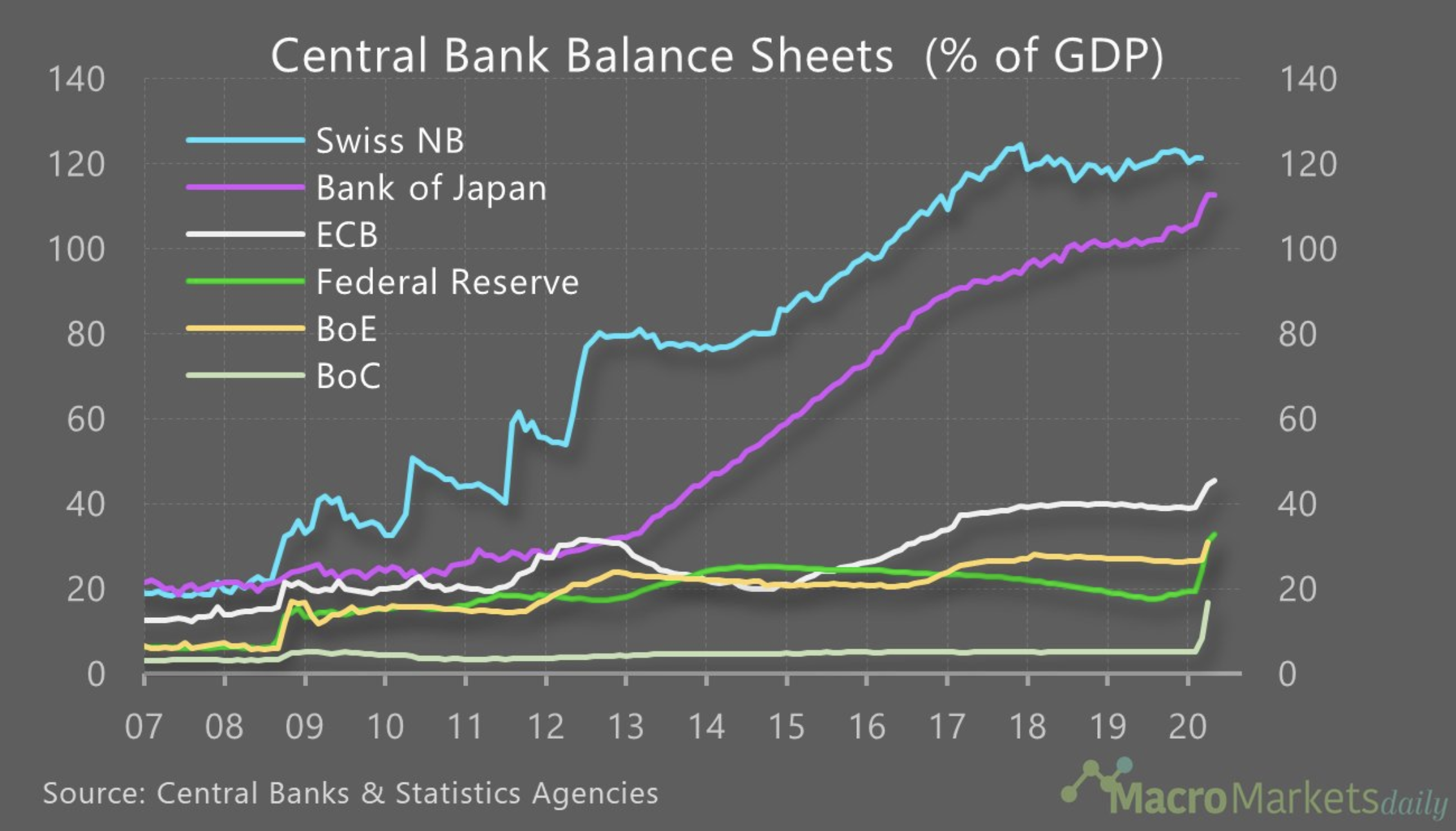 It is still too early to say now, but when you look at this graph, and look at GDP growth for all these nations, you cannot miss the fact that China is the one who will exit this crisis in the best shape of all. If in 10 years we all pay in Renminbi instead of Dollars, you can look back to these last 2 graphs and tell your children and grand children, that this is how it all started.

So here we are. 40 million people got made redundant in the US within 2 months. More than half of all Adults in the U.K. are being funded by the state, probably until the beginning of summer. My neighbours have an immaculate manicured garden. My Spanish holiday rental business, which was totally devastated by this pandemic, is getting more and more booking enquiries for summer 2021. Have we changed the model of society so much that we can afford these subsidies and see people booking their next holiday 18 months in advance now?

I think that we are just in the eye of the cyclone. All is artificially pumped-up. Sooner or later, something's gonna give, and it will hurt even more. We just have to be aware and continue learning / fighting.