I am old enough to have seen a few crisis, those who happen once every 7 years on average. And I wise enough to know that the price of anything you buy can drop to zero in the worst circumstances. What my brain was not ready to process however, is that in very stretched circumstances, the price of goods can turn negative. And as a matter of fact, not just negative, but big time negative.

Welcome to our new world, a world full of risks and surprises. Let's review the short, mid, and longer term consequences of a sudden negative oil price...

It's barely 4 months ago that I reviewed the Aramco IPO, the public listing of the biggest company on earth, valued at the time just over $2tn. Well this week, Aramco can continue to pump oil at under $10 a barrel, that still won't help has nobody seems prepared to accept delivery of the once so called black gold.

Despite the King of US tweeting early April that he negotiated a deal with the King of Russia and the King of Saudi Arabia to cut back the production of oil, for the first time in history of our feudal world, this past Monday, oil price turned negative. There was nothing the Kings or the FED could do about it. Those who are usually taking delivery of oil had no wish to get delivered the millions of barrels ready to be shipped, and the traders were left having to pay them for the privilege of accepting this worthless so (mis)called black gold. In a world producing 90 million barrels a day, but now only consuming at most 70m a day, there is just no more place to store this gushing oil, which really should have stayed in the ground! 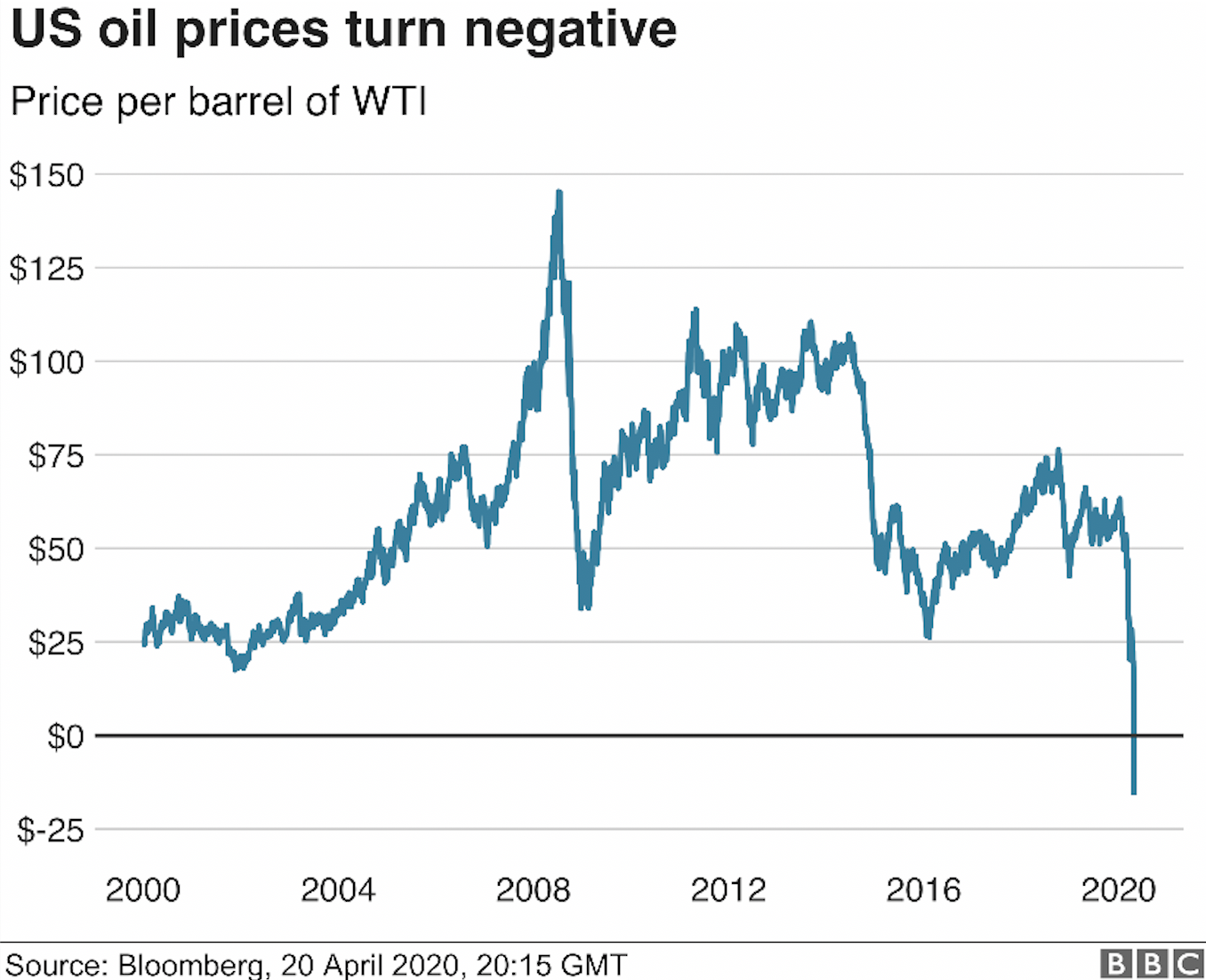 The graph above depicts oil price (Texas Oil delivery monthly) for the past 20 years. Still it shows a flattering representation. What about this one below, zooming in on Monday 20th ?

Oil price started the session at around $18, the lowest it has been in 20 years, an indication of opportunistic buys 🤑. And all of a sudden, it dropped and fell through the zero line, as if it was irrelevant. As a trader, if you bought oil at its cheapest of the past 20 years early in the morning, you would not only have lost all your money, but you would have lost 3 times your money before dinner got served. Because either you take delivery of all the barrels that you cannot store, or you lose 3 times your money, or you go bust. As a matter of fact, a few firms went bust before dinner...

As a side note, do not think that a few hedge funds going bust in a day is only what they deserved. The tech world has long ago enabled the Average Joe invest his money into everything and anything at the tap of a button. With more marketing pressure, peer pressure, and financial pressure, we are all just a tap away from putting ourselves into more financial trouble. In the week up to the oil price collapse, "Average Joes" have started buying cheap oil ETFs. On the day of the collapse, 160,000+ Average Joes were invested in the United States Oil Fund, via the Robinhood app 😳, an app supposed to be there for safe long term savings and penny scraping.

Now, beyond the financial pain inflicted to hedge funds and Joes alike, what is interesting is this: because oil involves physical delivery on a massive scale (you need refineries, oil tankers, and all sorts of infrastructure to store it), it is a lot less prone to the usual financial manipulations which either the King of US or its FED serfs are constantly doing behind the scene. And as this market could not be manipulated easily, it reflected a truer reality of the economic imbalances of today's world, what other financial markets are not allowed to express yet. It ended up saying: "You know what, not only your oil is worth nothing this month, but you will pay me to have the audacity of continuing producing it". 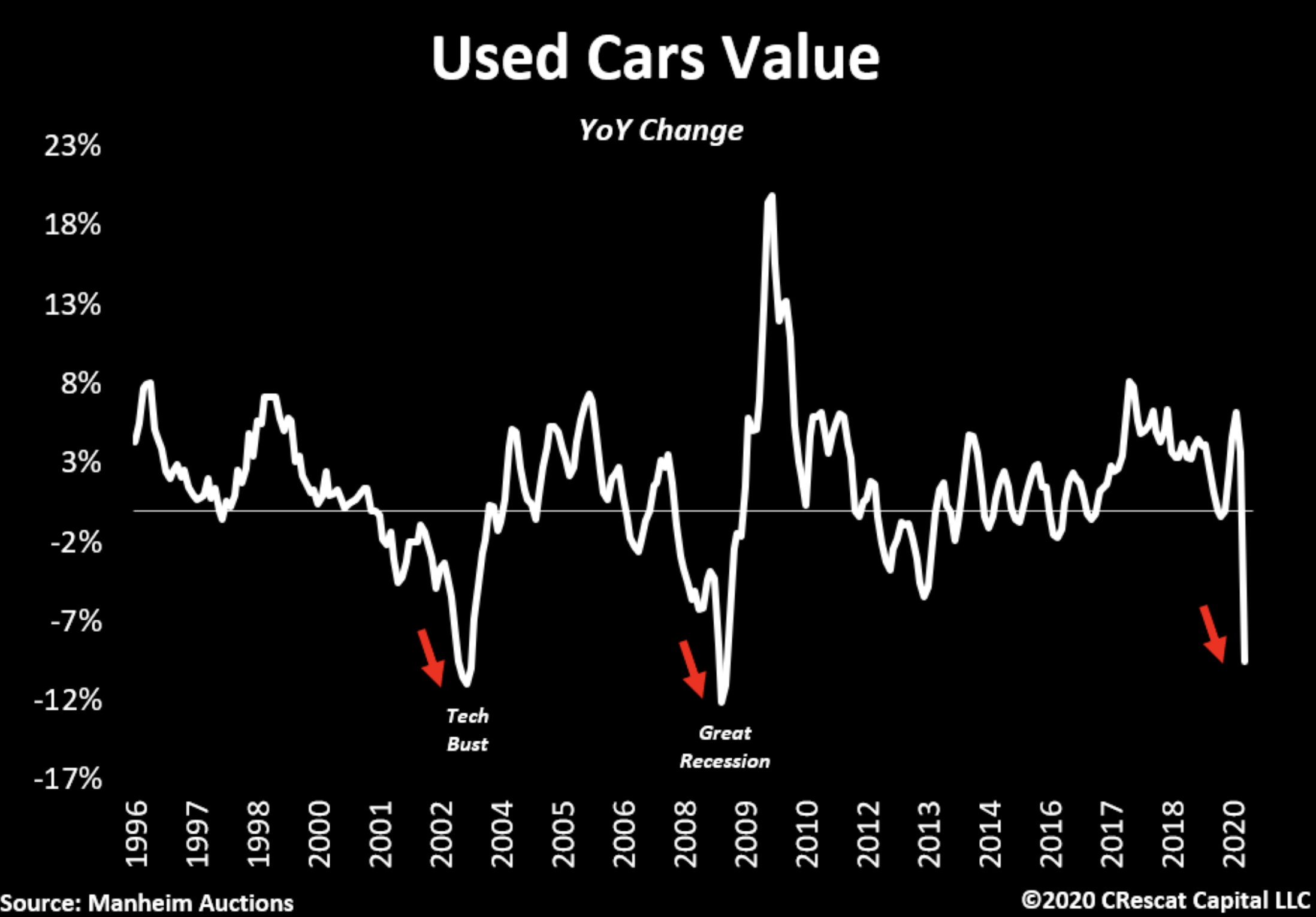 Hummm, I am tempted... 🤔 Money? It is worth nothing so you should pay me more with it to have the audacity of continuing producing it! Well, it's the logic, isn't it? Hyper production of stuff that we do not need or want, and hyper inflation of the currency that is required to buy all these shits...

An additional problem with this hyper production is that when you take the case of the US energy sector. Shale gas companies have sprung up like mushrooms, and these mushrooms have two problems: 1/ they cannot make a profit below $30-40 a barrel, having established a business model when oil was at $90 a barrel ; 2/ their capitalisation is low and their debt is high. There is an estimated $200bn debt for the US Oil & Gas industry alone. I know that as we are now getting used to count in trillions, this appears like a rounding error, but it would still probably be enough to collapse a bank or two. And then the contagion will not be one of virology, but of finance-ology. So far the financial sector has been robust enough to cope with the onslaught, but it is not a given that it will continue to keep afloat without further massive intervention. Good old 2008-style hyper-leverage was still a kind of good practise in 2019. Let's not assume that most of those too big to fail are immune to the wave of defaults coming their way from retail, travel, hospitality, you name it..., and now energy. They are still colossus with feet of clay.

Finally, to complete the bleak picture (do not shoot the messenger 😧), we may be going into another problem of scale. Those countries who have based their economy 90% on oil, what's going to happen to them and to their population? I will single out Saudi Arabia. Granted, Aramco can produce oil and still make a profit at $10 a barrel, which is the one exception on earth. But the country needs oil at a minimum of $60 to fund itself. We are unlikely to see the price of oil back to these levels. It is even possible that the planet's move away from oil dependency has just happened. The Saudis will have to find a new way of feeding 35 million people, and find it fast, or the 2010s Arab Spring may transform itself into a 2020s Arab Summer...

All right, in retrospect, this past week as sent us a very strong message: expect the impossible. There are so many things that we took for granted and in fact are not true. Such as "prices of goods must be positive".

We have to be humble and continue learning to extricate ourselves out of the more frequent, more abysmal, and more deadly pitfalls lying ahead. This new world order will leave tens of millions of people on the sidelines. Let's make sure we avoid landing in this lot, and then maybe we may have a say in reshaping the new-new-world.