The page got turned

Oh boy! I hope you are not falling for these charlatans telling you to buy the dip. I hope you stay smart, and you keep smiling, because you will need a lot of smart and smile in the next few months.

Our world has turned the page. It is not because I say it. It is because it did turn the page. Look at all the evidence, and come to your own conclusion. Then, pretend you know nothing, because in the new world, our anchors have moved. In the new world, we need to tread carefully...

Pretend you know nothing! Pretend you just came back from a month of isolation in a wild remote area of the world with no access to internet or TV. You arrive back at the nearest town, go to the local food store. Very few people, only this guy buying meat...

You rush outside and see a TV running behind the window of a closed shop. Among many apocalyptic messages that you have difficulty to grasp, it shows you this picture of the stock market. 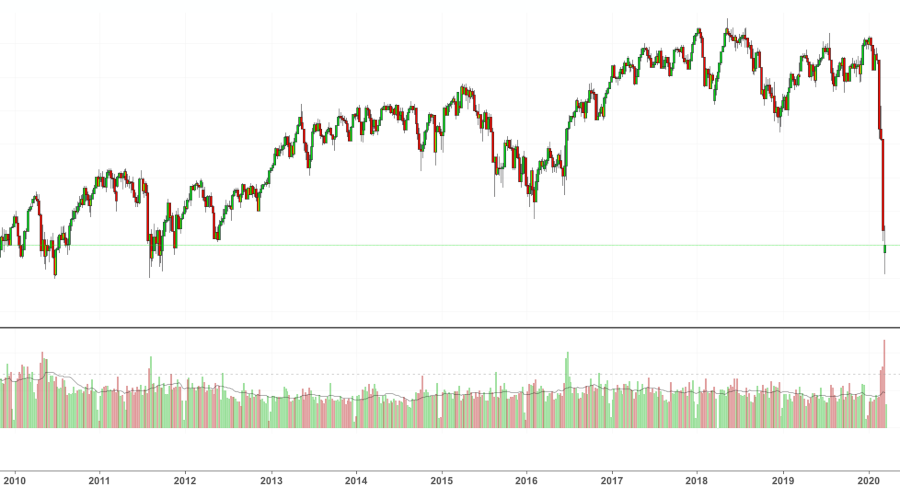 In the financial market (the picture above is the U.K.), the last 10 years just got wiped out in a month. You ask yourself. What could have happened to cause this? Have we started World War III? Is it nuclear or chemical or bacteriological or what else?

From now on, you will have to pretend that we are in World War III, and that the whole planet is at war. That's how it is. Whoever pretends it is otherwise is either not capable of calling shit 💩 what it is, or is bullshitting you for their own benefit. That includes the investment community charlatans, the politician charlatans, and the conspiracy theorist charlatans.

Last week, I wrote time and time again that it's going to hurt. Well, it's going to hurt even more... Once more, as these events are once in a lifetime occurrence, there is no roadmap to navigate our way out. What I write is what I believe today, and truly what I apply to my personal situation, first to avoid permanent damage, and later when the time comes, to get my way out of this shit in a better way than if I had done nothing or worse, listened to the charlatans. You do not have to follow me blindly, but you do not have to follow others even more blindly. Build your knowledge and make your own decisions.

I believe that the content of this article is too important to be left to only a few people. Please take a minute to forward it to your friends to help them build their own views and protect themselves.

I said it last week, but I will say it even more convincingly today. The page got turned, and there is no way back. There was a pre-COVID19 world, and there is a post-COVID19 world. These worlds are not the same. What worked in the "pre" world will not necessarily work in the "post" world.

The problem is that the Central Banks never fully recovered from the 2008 crash.

As I wrote in the autopsy of Zombies article early this year, only the Fed was not a zombie yet. But as I also wrote in the Fear of Missing-out article by end of 2019, instead of accumulating reserves, the Fed went all-in printing more money and barely raising rates from the rock bottom of the 2008 financial crisis. So we started the journey at the top of a financial bubble, but also at a near bottom of Central Banks ammunition.

Then came the virus. But the virus is not the whole story. The virus is the pin that popped the bubble. The virus could go away tomorrow. Still the bubble has popped. And this is the problem. It popped with no ammo left.

As the economy is forced to shut down nearly everywhere on the planet, the Central Banks panic and try to save their world. A world which has created so much debt that it enslaved us all into work for life to pay them back. So to save their world, they now print helicopter money. In a few days, the US will give $1,000 checks to most adults and maybe also $500 to all children. In a few days, the UK will subsidise up to £2,500 salary for those who cannot go to work. The ECB cannot do this, so they leave it to each Eurozone nation. Instead the ECB indicated it will buy stocks on the market for €750bn. As if this is not enough, all interest rates everywhere are now at zero, and the Fed is also giving daily injections in the market for $1tr (one trillion dollar).

Let's be very clear what this is. They are creating future debt to enslave all future generations walking or crawling on this Earth. But still... they do not appear to win. "Whatever it takes". Yeah, well it does not work anymore. The market is repricing. $20bn buyback used to scare the shit out of short sellers. Now they print 100 times more money in a week or a day, but that won't do it. The market is repricing, and everybody wants out. The charlatans try to keep it afloat, say it's a good time to buy. Like they said a month ago. Like they said a week ago. Like they will say in a week. 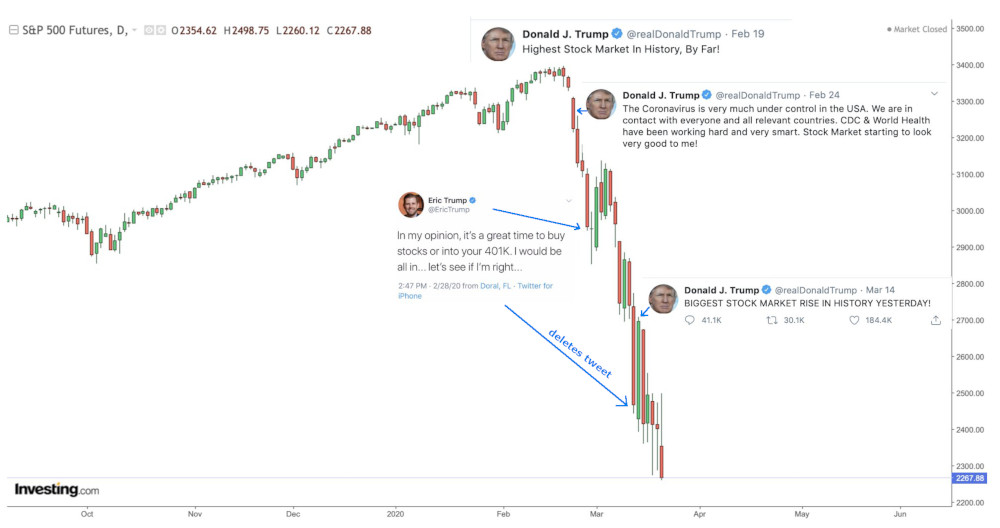 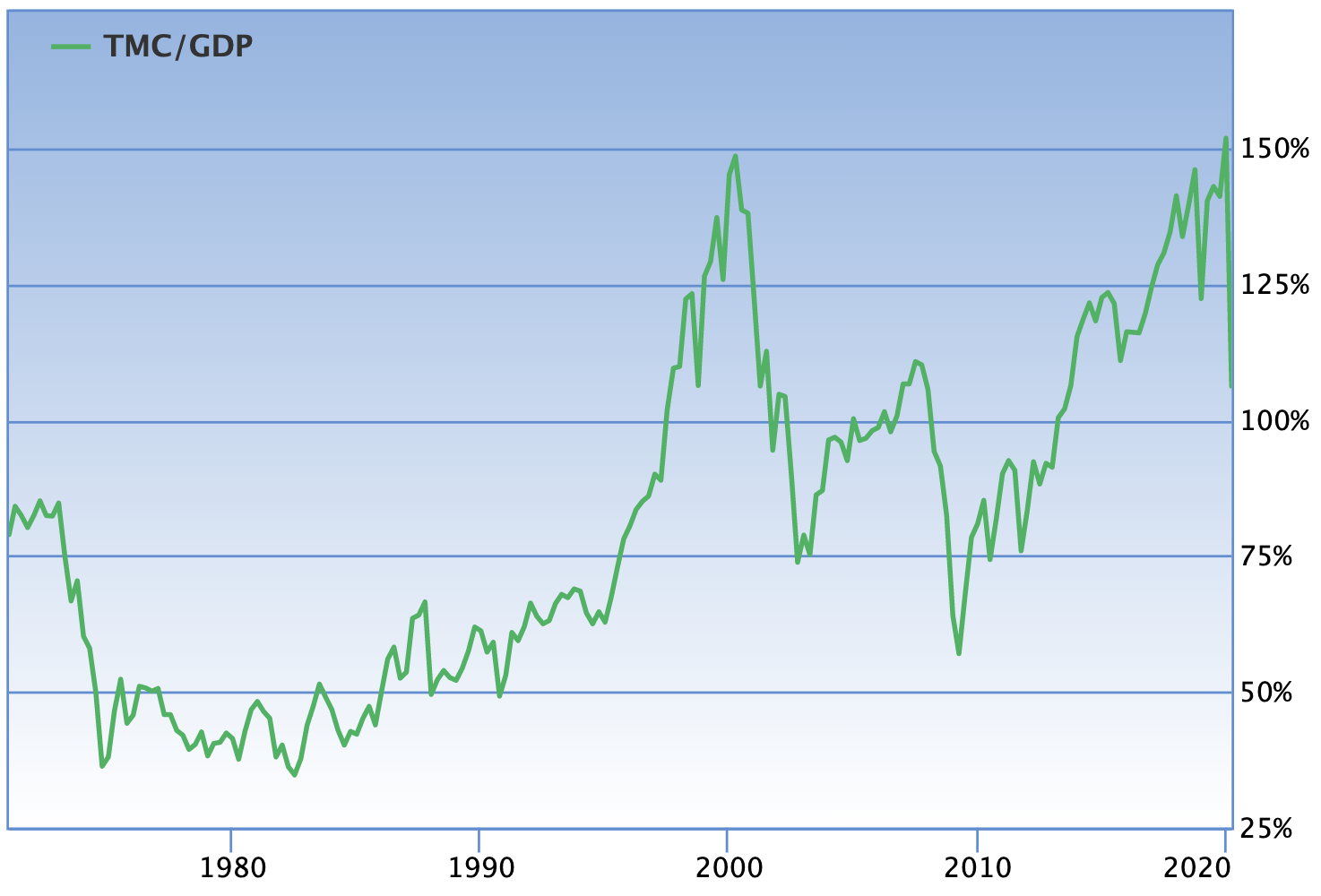 The one above is the "Warren Buffet" indicator. The price of the stock market relative to GDP. Not easy to read the sudden drop on the right hand side, but we are currently around 106%. The median over the past decades is around 90%. And guess what, US GDP will not be flat. Minus 3%? Minus 5, 8, more? And if that's not enough, add a bit of panic in there (we have not seen enough of it yet!) and we could be down to 75% in a flash... So the stock market is not finished with its repricing exercise. And I am not talking about the economy here, just the repricing of assets.

Then there is the virus. As we know, US/UK have not seen it yet. They may be preparing and shutting down their economy, but they have not seen it yet. From what we know, the curve in the US is more aggressive at its start than the one of Italy. Just yesterday, Italy had 627 deaths. There is every reason to believe that the US will suffer a similar fate, let's round it at only 6 times more population-wise (I feel generous), say the US will get to 3,750 deaths in 10 days. And again the day after, and again the day after... If you think there is panic today, wait until all hospitals are full, the news ticker focuses on the daily death count instead of the stock market, and the army is called in to transport the deads in less affected places (as they did yesterday in Italy) because the crematorium are working at full capacity and cannot burn bodies any faster. 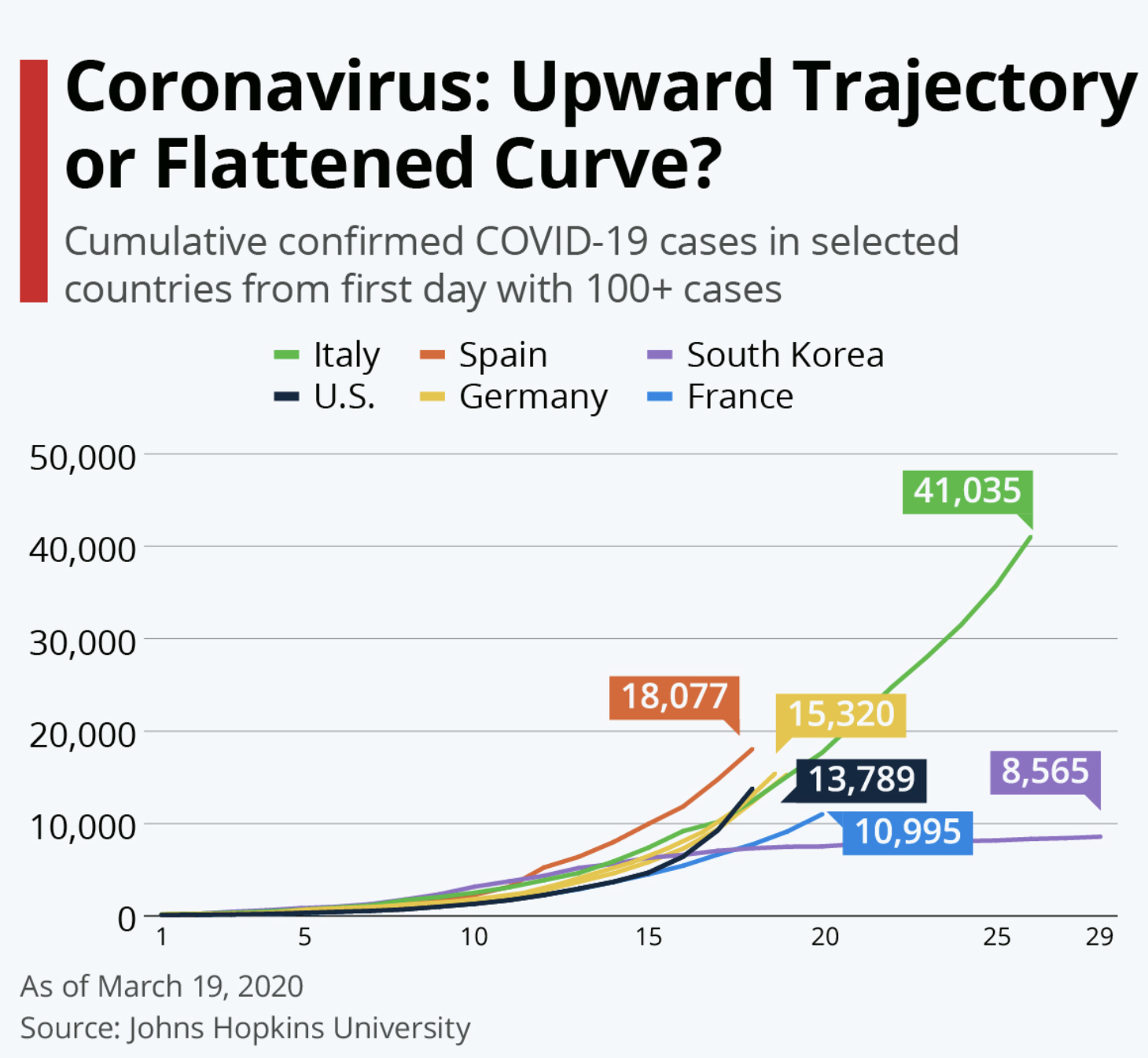 And finally there is the economic impact. And in the end, this is what matters, because it's not going to impact just a few thousand billionaires or a few million old age people. No, it's going to impact the everyday life of a few billion people. And for good. Around the same time as the King of US tweeted that "the stock market is starting to look very good", I mentioned how the world was fragile and we were heading to a recession. Well, it's going to be the recession of a lifetime. We are already steeper and faster than any past recession, including the 1929 one. Many companies will sink. Many industries will be redefined. Governments will have to choose which ones they keep afloat, which ones they let go. They will not be able to save them all. And those which will be saved will be saddled with a debt that will transform these companies/industries into future zombies, as they will only be kept alive to repay the debt.

OK, I'm sorry if you do not like the content of this article, but we have to deal with reality, not fantasy. And the reality is that there is no switch button that will give us back the "pre" world once this pandemic is under control. Get used to it, the world is changing fast. For our benefit (mine too!), I will repeat what I wrote last week, with a few adjustments.

In general, I have no idea what my next post will be about. But there is so much happening right now, that I could write everyday and not be finished. Unless the world explodes next week - do not think it is impossible, the ECB is broke, and there could be an IMF bailout of the whole Eurozone for what we know - we are going to talk about the mother of all bubble. We are where we are because of the Central Banks. By end of 2019, I thought naively that we were in a Tech Bubble (you know, the FAANGs). Bah, when you look at the flea, you do not see the elephant...

The Central Banks debt bubble is the mother of all bubble. The financial system that the Central Banks and Western Governments have created relies on debt to infinity and beyond. It creates extreme wealth inequality and repeated bailout of the richest by the population, with more debt, enslaving, and misery put on their shoulder until the next crisis. This is what is at stake, and this is why they now print trillion dollars every week and distribute paycheck to the population (helicopter money) like there is no tomorrow. Because as far as they are concerned, there may well be no tomorrow.

They win or they lose. Our future depends on this fight. And at this stage, I have no idea what is our best option. Central Banks are one of the worst thing that happened to humanity, but what else is in store to replace them if they fail?