The Two Sides of Opportunity

We live in a world full of opportunities. Even more so now than at any time in the past 10 years. But the question is: who is at the good end of the opportunity stick?

If anything leads the way, it is the stock market. With instant pricing (and mis-pricing 😮), it gives us a hint on what the opportunities will look like in the months to come in our slower world.

Of course, the stock market is badly rigged as all good casinos are. But still, it offers opportunities by the thousands every day, hour, minute and seconds. At each instant, anybody in the world can invest and either make or lose money. Everybody with a minimal setup and capital can seize an opportunity.

Let me entertain you with a follow up of the HTZ story that we accidentally opened last week. I did not initially intend to make a big deal of this, but after all consideration... it is a big deal. Yes, it is a big deal, because it exposes well the question of the unbalanced risk vs reward that different actors are taking in relation to what would have normally been the liquidation of a public company, like many others have happened in the past.

But in our rather twisted current world where value is more and more decoupled from price, it looks like someone has found a formula to create a Billion dollar out of thin air. I mean someone else than the Central Bank cowboys, of course 😂.

Following last week's dead cat bounce of HTZ, I expressed my dismay that the cat bounced a mere 450% in what was a bankrupt company waiting to get liquidated at 1 cent to the dollar at best. But I should have known better. When something looks crazy, just wait a little more to witness crazierrrr. This past few days, the magic market forces "bounced on the occasion" to make HTZ jump around 800% from its low of a few days ago 🥳. For a dead cat, it's a hell of a bounce... 😹 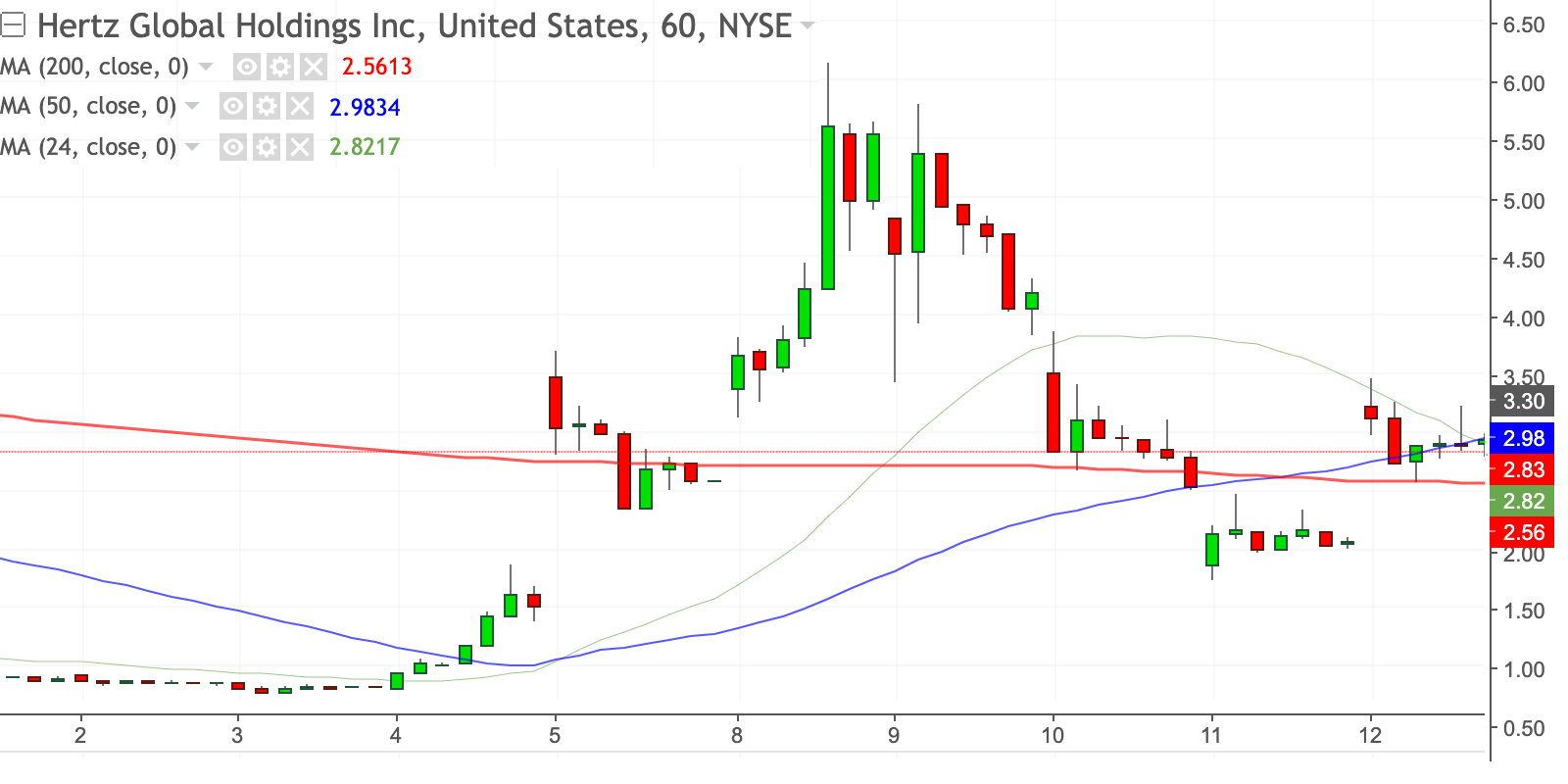 That prompted the bankrupt board of the bankrupt Hertz company to file for an immediate $1b capital raise on the back of the good performance of their stock. Come-on, 800% capital appreciation in a week, not even Google, Amazon or Apple in their best moment could deliver this! So the bankruptcy justice allowed the $1bn capital increase to go ahead. If nothing else derails the plan, it will be done next week...

Therefore I give you the recipe for defrauding the public from a billion dollar within a few weeks.

The following graph depicts the "opportunity" story. As the price of HTZ falls into oblivion, from the high teens to the zero line, the value of the company fell from $2bn to around $150m en route to sub-100m. 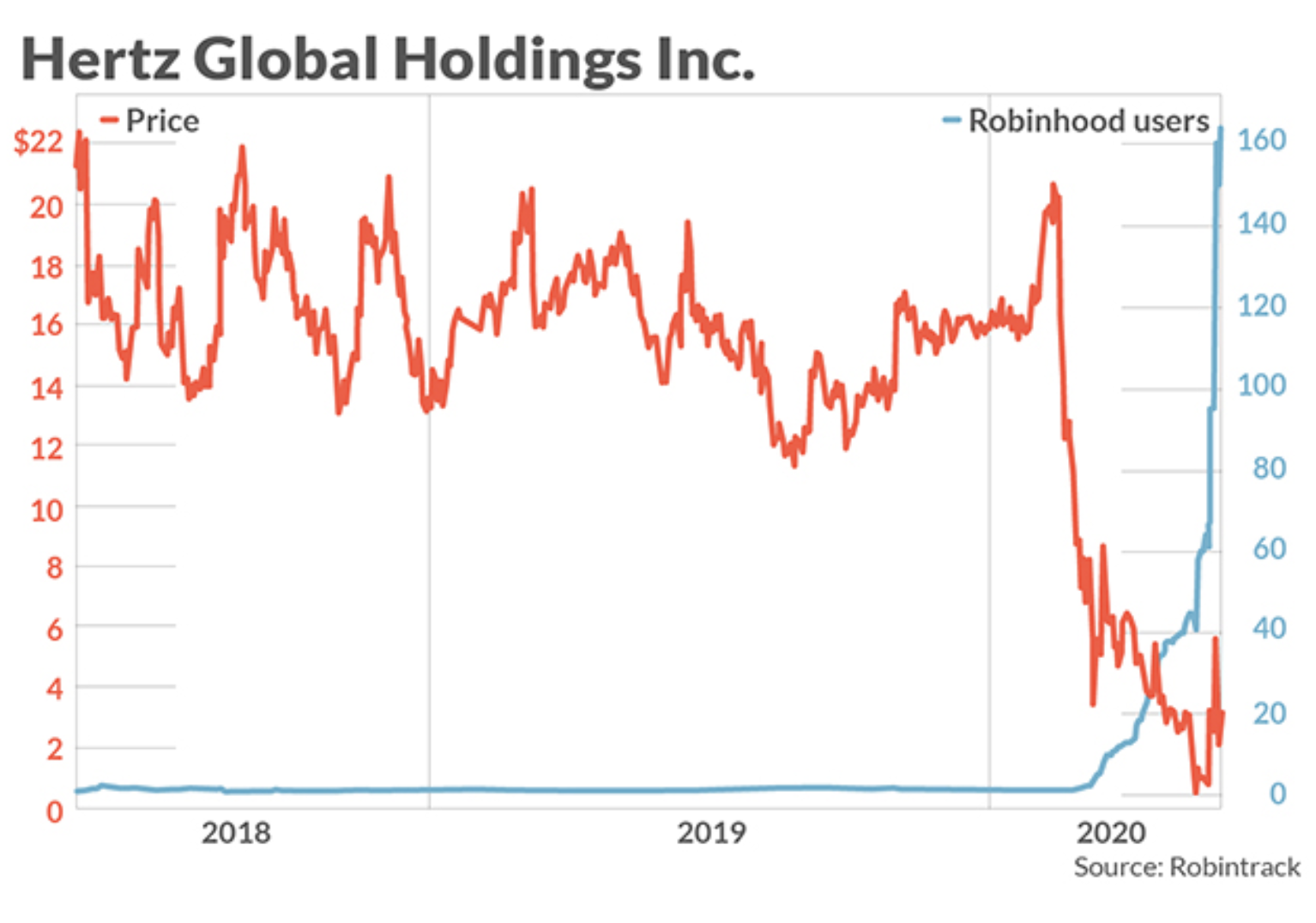 As this was happening, HTZ got pumped up as the most discussed bargain on RobinHood, taking the top spot of the 100 most popular stocks for most of the past week. This in turn triggered more than 150,000 small investors to put part of their state aid check into HTZ. The frenzy got the dead cat to bounce so much that everybody got convinced the cat was alive. Incredibly, if everybody thinks it's alive, then it must be alive, and what used to be a billion dollar company early February is likely to be again a billion dollar company by next week. The dead cat will get a $billion injection and will get one more life!

With free money created all around us, it creates distortions to allow unimaginable events to occur. In this case, we witnessed free money going into the most stupid asset allocation: a bankrupt company waiting to be liquidated. I am even tempted to write that free money can easily go into gambling rather than investment (investing in HTZ this past week was gambling). If you need another proof, look at the price of the 888 stock which shot-up 100% in the past 50 days.

This year has already been full of price vs value disconnect. After the negativity of oil story, Hertz is just another incredible Cat story in this upside down world 🙃!

What happens on the stock market is an accelerated version of what will happen in the slower world of safe investments, such as property, land, and small business. It shows us how much the disconnect between price and value can be pushed, and will be pushed. It shows us that an asset valued $2bn a mere three months ago went to less than 10% of its value in just a few weeks, and then can magically shoot up again to a $1bn value on a dime.

Our goal will be to use our wise head and be on the right side of the stick.