No idea what money is anymore

Hey my friend! Looks like I have spent the week in the washing machine once more! And by the look of it, I am not the only one.

No frankly, I am starting to doubt that I really know what money is. Well, I think I knew what it was. But I wonder if I still know what it has become or what it will become...

I am certainly not the only one who had his head spinning this week. In the last few days, the ECB has increased its money printing program from €750bn to €1.35tr (trillions). There is also an anticipation that they will add another €600bn by september, making it a near €2tr of new money in the space of a few months. Let me round this to you to €24,000 per household in all 27 countries of the Eurozone (rounding a household to 4 people). Will it have to be repaid? Well... that's somebody else's problem... 😇

Back to counting the zeros... Even the mainstream media got totally confused and put on a big headline "ECB expands... by €1.35 billion". Errr... guys, we count in trillions now... 🥳 Your headline is x1,000 time wrong. 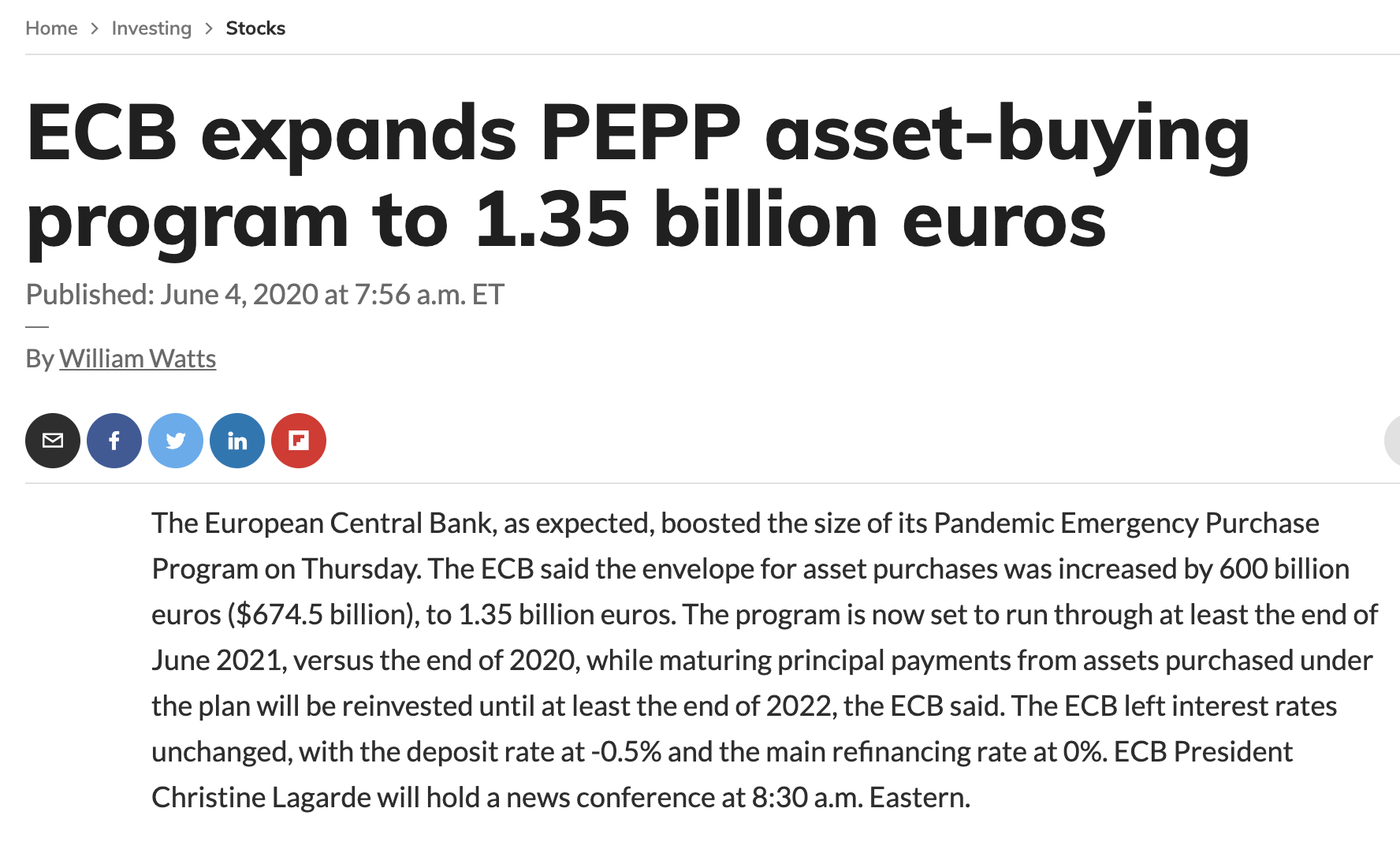 Like MarketWatch this week, we are all losing count... The ECB is the small guy. The elephant in the room is the Fed. So, how much money is the Fed printing now? It starts to be hard to count this... At the risk of boring you, this is my little attempt at understanding the Fed's money vomiting 🤑 (it cannot be called "just" money printing anymore). Here is what the Fed does at this stage:

Frankly it's possible that I missed some or that another line of support will be invented next week. My point is that at this stage, who can tell me what money has become? Who can tell me how large is the hole in the money measuring bucket that I was referring to in Out of the Rat Race?

To give another view, let's look at the past 45 years of the gap of funding government spending in Japan (translate this by "the amount of money printing by the Bank of Japan"). Considering that Japan suffered their depression back in early 1990s it s a good model to understand our risk. As you can see, we are in Zombie land where the gap is widening beyond repair. Money vomiting 🤮 for generations to come, in a never ending cycle. 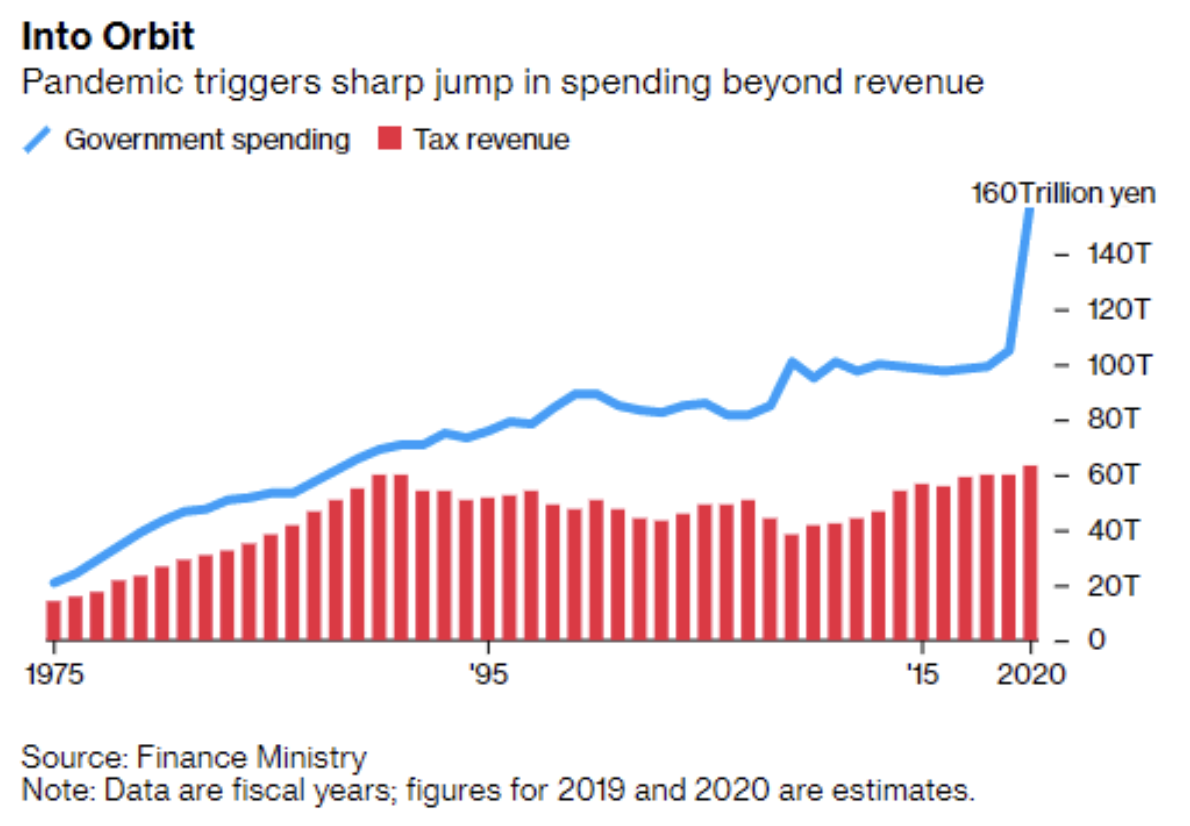 Now, we have to realise that the 2020 Money Vomiting is coming on top of a long standing money market manipulation. I found this graph below interesting and revealing. It tells me one thing only: the stock market is manipulated by financial institutions and friends (hedge funds and co) for their own benefit at the expense of Mom and Pop. All the profit on the US market for the past 15 years were made "out of normal trading hours". If that's not a rip-off, what is? 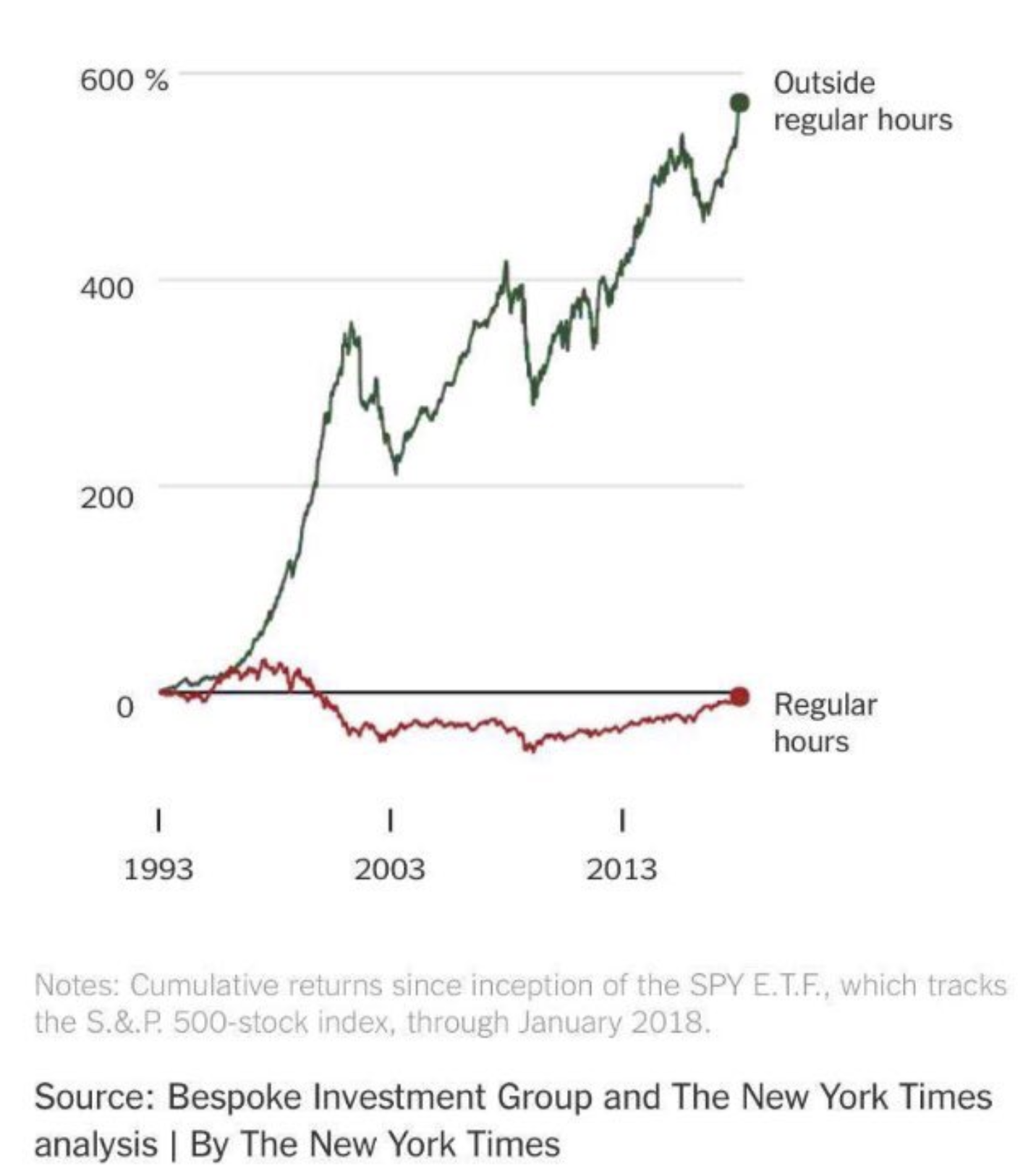 The problem is that Mom and Pop either do not yet understand this, or feel they have no choice but to be in the game. With the free paycheck they received from the Fed (via the Government) these past few weeks, Mom and Pop have started to invest in the market via apps such as RobinHood which can quickly become more of a gambling platform than an investment one.

I leave you with this last example. In the midst of our financial tsunami, Hertz - the car rental company - filed for bankruptcy on 22nd May 2020. With more than $18bn of debt for less than half in revenue and only losses to show up for (talk about leverage!), it was not going to take much of a downturn to wipe them out... Even with the Zombie Fed buying back the debt of Bankrupt firms (there is no end to the mis-allocation of the Money Vomiting), you wonder how this firm can be saved. It is going to zero and that's it.

Trading at $16 per share before the pandemic, it went down to $0.55 when it announced its filing for bankruptcy. On its way to zero and a few cents, all normal to this point. But this week, money had definitely no meaning anymore. Nasdaq ended yesterday at its best record high ever 🥳. In what should be the first few months of the most severe depression of the past century 🤫. So in this context, Mom and Pop all over the country used the RobinHood investment gambling app to buy into a small stock which went from $0.8 to $3.60 in two days. How about making 4.5 times your investment bet in two days by propping up a stock ready to take off? Who cares if this stock ticker - HTZ - is associated to a bankrupt company? It's a stock ticker, it moves, let's play!

It's only three weeks ago that I mentioned the disconnect between price and value. I never thought it would be disconnected to this point...

Frankly, this week I have had a hard time to grasp what money is and where this is all going. I feel that this week is the tipping point, but in this Zombie Land of manipulation by Central Banks and Governments alike, who knows what the end game will turn out to be? To play the game well, we must know the rules well. At the moment, the rules are changing...