The fight for Control

This week, Silver has clocked the biggest weekly gain since the last global crisis. Gold is also ramping-up its parabolic move, reaching $1,900 yesterday.

As I am saying this, it is not just a question of precious metal and inflation. It is also a question of currency, debt, power, order, and change of order.

I am mainly asking this question: what is our future financial freedom made of?

It is more important to understand the big forces at play, the multi year trends, than the daily news and their constant contradictions. In the world of money, and the world of King of Money USD, we are still in this race to the bottom as to who is going to debase its currency faster than its neighbour, to gain a short term advantage in exporting their stuff and therefore sustaining their economy for one more day. This race to the bottom is called currency debasement, and all of them are racing each other, as you can see... 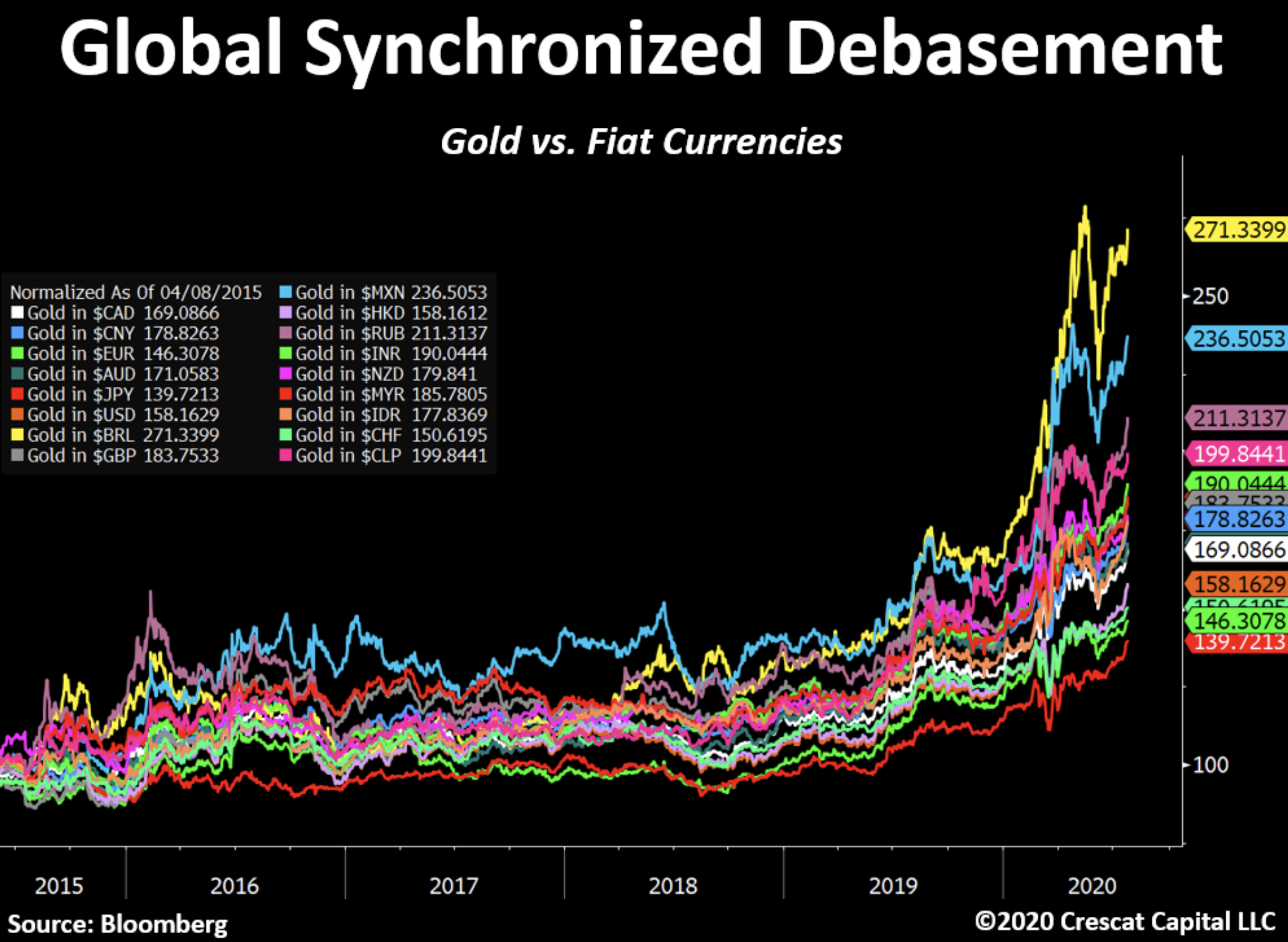 In this race to the bottom, only the USD has an unfair advantage: the ability to export not only stuff, but inflation too. The way this is done is very simple: they print dollars which in turn, more than half of these end up being EuroDollars, finding a home for themselves outside of the US. A large part of these EuroDollars ends up in other wealthy countries' Central Bank as reserves. Another part is channeled via other countries' wealth funds or commercial banks, and ends up as loans to companies in need of funding and operating in such other countries.

As the Dollar is loosing more value, the reserve of these foreign Central Banks is also loosing its value. These Central Banks are holding assets which are worth less and less, as the Dollar drops in value relative to either Gold or their currency. In turn, their monetary wealth diminishes by as much, making other stuff relatively more expensive, hence inflation got exported. 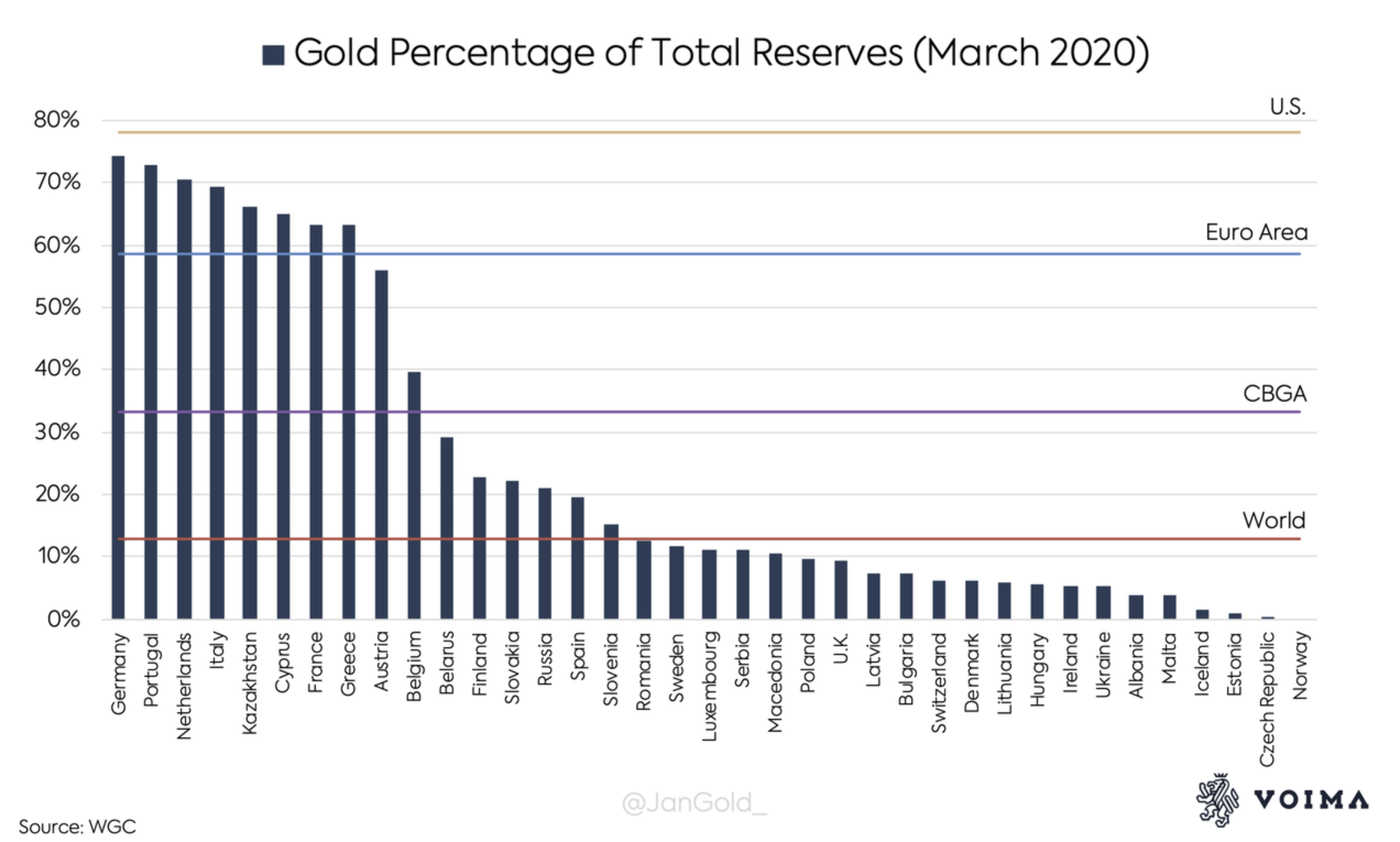 In addition to this, if the US is at the top of the range with 76% of its reserve in Gold, you have China with 3% (well, officially, this is before the discovery of fake gold...), and Japan is at the same 3% too. And I suppose you saw Switzerland is at 6%! For a country who is supposed to have so much gold reserve 🤔! Or maybe the gold is stored in commercial banks' safes for the benefit of the wealthies 😎...

Well, regarding Japan and Switzerland, I think we made the case clear already, they are snakes eating their tails, until they finally realize that they are eating themselves to death. The Japan Central bank is protecting its economy by printing more Yen used to purchase more shares of Japanese companies and inflating their stock market. Oh great! And the Swiss have found nothing better than to print Swiss Franc, exchange it against USD, and buy into the MAGAFs (Microsoft, Amazon, Facebook, Apple, Google) also inflating the stock market ; only this time it's not theirs...

But as always, nothing is that simple, and a single graph cannot depict the full truth. I found this other graph below very interesting. Instead of seeing the percentage of Gold held in reserve at a Central Bank, we could look at the Gold reserves vs the country's GDP. This would give another indication as to which countries are most dependant on other global currencies, including the USD, and which ones are more insulated with Gold reserve protection. 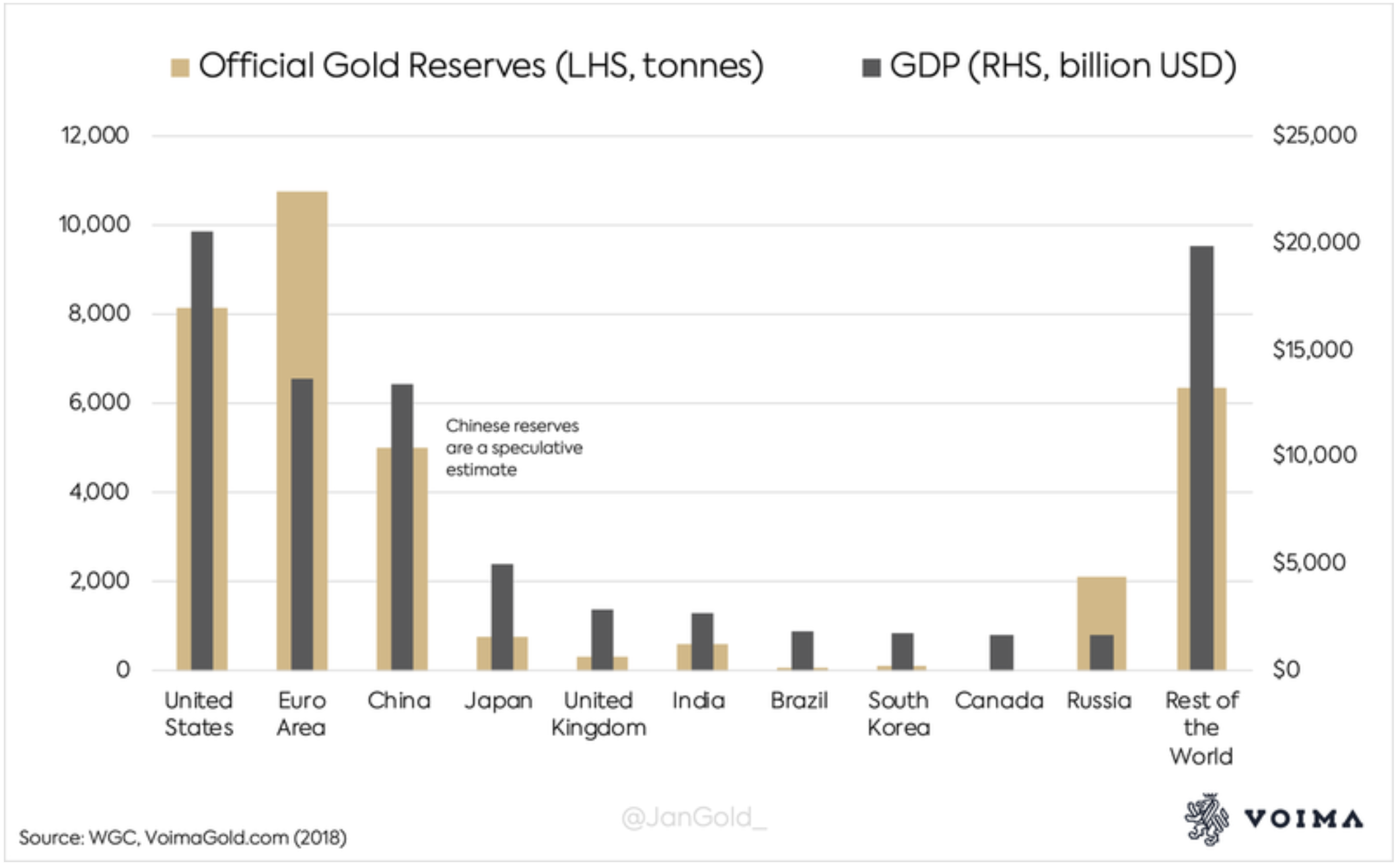 The picture seems to infer that in case of a huge shock to the world (oh, did this huge shock happen earlier this year??) the countries most able to defend themselves on their own are obviously the USA, but then the Eurozone, Russia, and China. The U.K. will have to call on its special relationship with the US, and Canada will have to dig Gold out of its ground... The rest of the World is pretty F...'ed 😱 because only a few mega-rich countries have Gold reserves (these Sovereign Wealth funds built on PetroDollars), the rest only have USD debt... 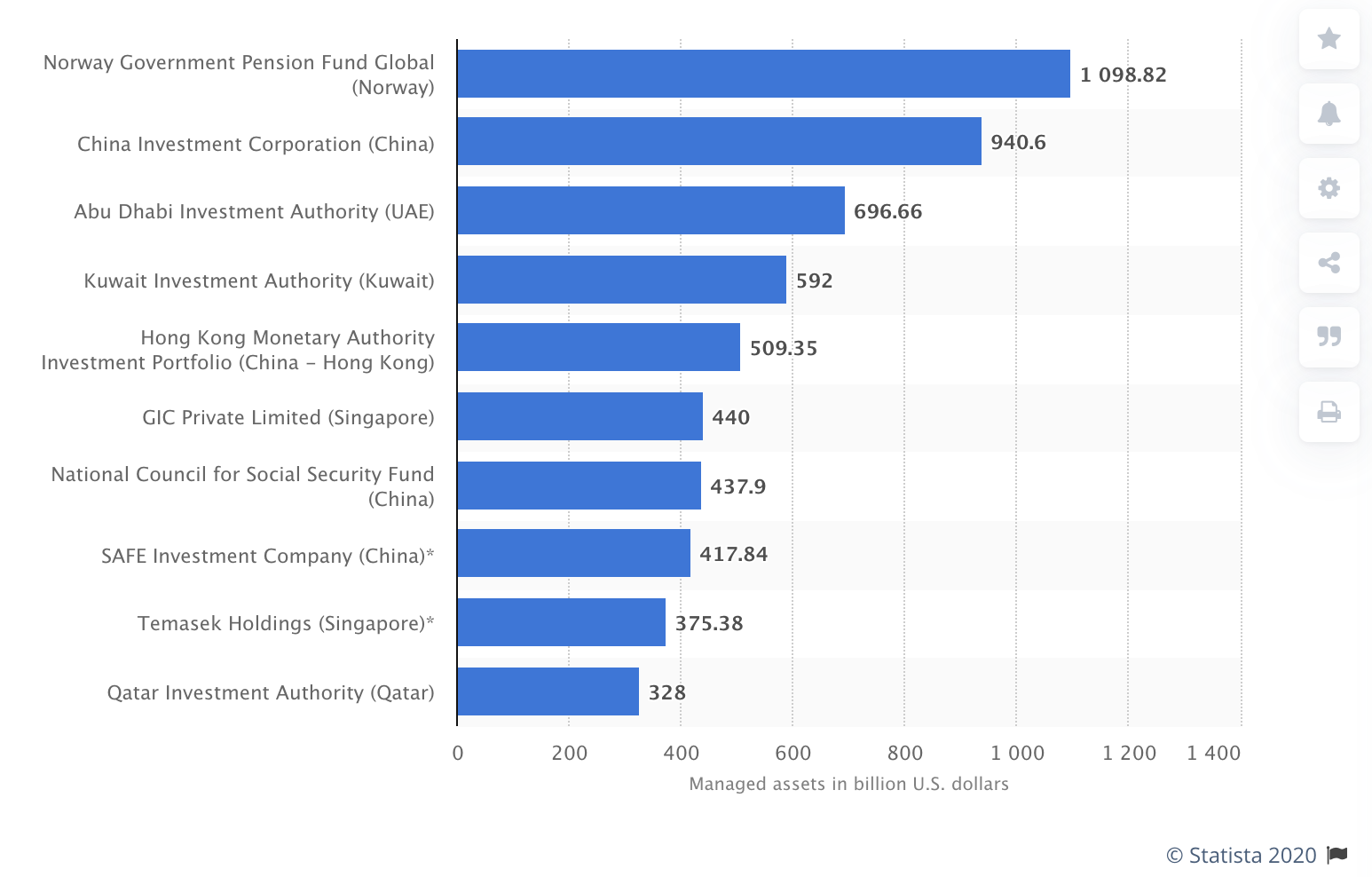 One trillion Dollars in the pension fund of Norway... Not bad for a fishing country... But I disgress...

In fact, most Central Banks reserves, out of the Gold assets, will either hold a disproportionate amount of USD, putting them at the mercy of the US monetary policy, or they will hold what is called a Special Drawing Right (SDR). An SDR is just a mix of foreign currency, set by the relative power of those countries and currencies, such power being influenced by history, military bruteforce, and western world domination.

As I mentioned a few times since the beginning of this covid, the future world is being shaped right now. A future which could be defined until the children of your children get to retirement. Just for a start, the €2 trillion corona-debt agreed this week has a repayment schedule until 2058. How about enslaving your children's entire life for a few months of a virus?

This future is either a continuation of the US domination, with more of the same (more debt 😳, more debt 🤢, more debt 🤮)... or a new order. If there is a new order, those who can fight for it are the USA and China. But there will also be those who insulated themselves to control their own destiny. At this stage, it would seem that Europe, Russia, and a few rare but very wealthy countries will be able to protect themselves a little bit when/if the new order comes. The rest of the world will suffer big time I am afraid. New order or not, the world will need more slaves to pay back this huge debt, and the world will find them!

It's still going to take more time, a few more years probably... but it's coming.

More of the same vs new world order, which one?