Robinhood is the new Casino

I have a mental problem with business models where the client is the product.

I have avoided Facebook for its first 10 years of existence, and have only been forced to register on the platform to avoid impersonators and fake accounts trying to profit from my business.

With Data being the new Gold, no wonder we are more and more becoming the product. Welcome to the Robinhood casino...

I have touched on the Robinhood subject a few times already. Somehow it is quite fascinating. It arrived at the right time, with the right triggers. Let's face it, 40+ million people suddenly getting unemployed, but paid a $1,200 check for staying home, while the stock market has daily cases of 100% gains and is just at a click-of-a-button away. Access to the largest world casino from the comfort of your own lounge with the state money and the added spice of constant Fear Of Missing Out and social media show off.

Robinhood is adding at least two million new accounts per month. Think about it! Each week, half a million new traders who for the most part are not financially educated, but who can "trade as others do" and follow the herd. Some astute investors have already jumped on the opportunity and are giving this advice: when a stock gets hot (as was the case with HTZ or KODK) wait two days until the Robinhooders get in, and then short the crap out of the stock and pocket the money for their ignorance and education. If you are not sure what I mean, look at the Eastman Kodak YoYo move between 27th July ($2 a share), then 29th July (up to $55 a share) and early August (flattening around $15 a share...). The Robinhooders got killed between 29th and 31st July.

Talking about KODK, there was also a good LOL 😂 story when it ramped up, as a shortseller pushed his sell button twice whereas he apparently wanted to mouse over it... The short story of it (eh eh!) is that he lost $1.5m in a few minutes, not being able to get out of the amplified trade, as the ramp up was so brutal and the circuit breaks for halting trading were triggering every time trading reopened at a huge gap up.

Apparently, Robinhooders and co are making 10-20% of the active trading market now. That's a huge number. Also, that's a huge number of less-educated-more-follow-the-herd type of traders, and guess what, in the tiny penny stocks and other rampo-ready opportunities, they may be making up 30-50% of the trading activity. And that, my friend, creates volatility. Or opportunities as the astute investors / short sellers see it (when they can master the mouse click 😂).

In addition to this, apart from Robinhood, there are a few other investment companies which profit from the robinhood-users product. How do you think Robinhood makes money if they give a free trading platform to their users? Well... they get a commission by High Frequency Trading (HFT) companies, which will front run the trade.

Let me give you an example. Say Joe wants to buy KODK which is a hot stock. Joe presses the Buy button on his Robinhood app, for 100 KODK. Robinhood alerts Citadel Securities, a friendly HFT that 100 KODK are up for grabs. Citadel buys 100 KODK on the market at the best price in the next millisecond, and then sends a wink to Robinhood, that they can place their order. Robinhood buys the 100 KODK from Citadel at a $0.0011 extra per share. That's just 11 cents for this typical transaction. At the end of the month, Citadel pays Robinhood a commission for the business of having taken a few cents on each RobinHood user transaction. Sometimes, this leads the SEC sending a fine to Citadel and co, but most of the time... it goes with the flow and everybody keeps silent. Robinhood is estimated to have made $47m in Q1 2020 by routing their client orders to HFTs. Citadel and co make good money too, as you can imagine. And the Robinhood-user-product is happy too, as he had no fee for making the transaction. Such a perfect world 😎!

But this is going to get more juicy very soon. Robinhood is now applying to allow its users buy more complex financial instruments at the click of a button. These are the CLOs (Collateral Loan Obligations) and CDOs (Collateral Debt Obligations) which were so badly rated (AAA whereas they were junk) and therefore called toxic assets during the 2008 financial crisis. Well, now guess what, Mom and Pop will soon be able to buy into those toxic assets at the click of a button. You can be sure that Citadel and co will place themselves in-between to take their cut whilst serving the toxicity.

I feel that the financial world is becoming a very unstable system. On one side, the government is intervening constantly (on the buy side) to keep the market in its bubble. On the other side, there are millions and millions of rookie traders placing uneducated FOMO bets into products they understand less and less, but where very sophisticated investment companies are making a killing on the back of the herd's ignorance.

As billions and billions of investments were being taken off the market by large and sophisticated investors, Robinhood users jumped in by the millions putting their savings in the stock market casino. 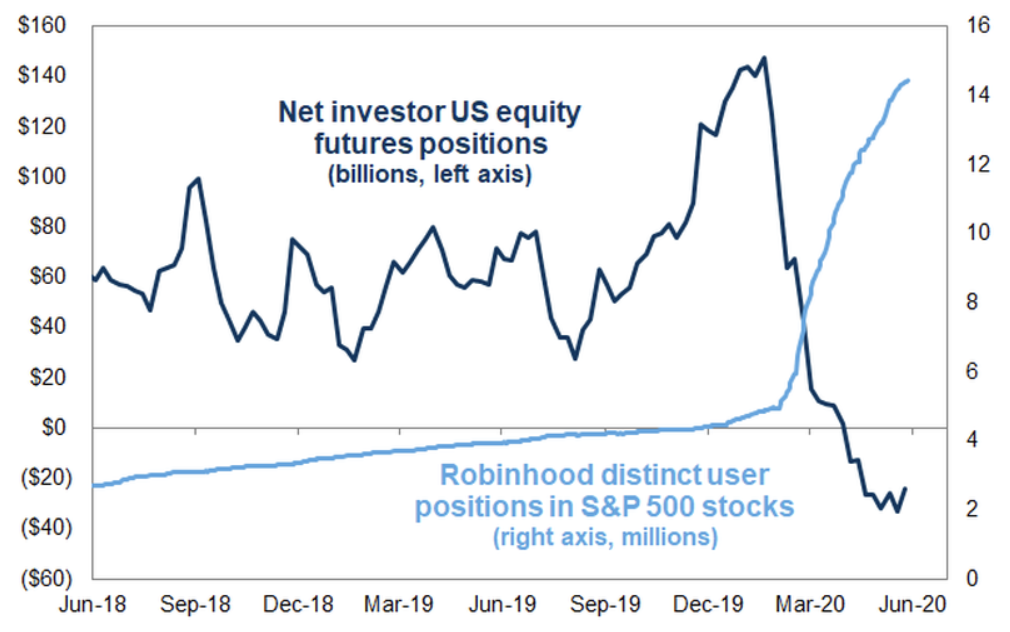 Yesterday, Robinhood announced that they will stop making some of their APIs accessible to third parties, to avoid automated trading systems trade against their users. They will apparently also remove some automatically generated pages sharing trading trends and habits of their huge user base. However, I doubt that they will stop sharing all their data with their good friends such as Citadel...

The client is the product, they need to milk it somehow...