It's the economy, Stupid!

Yep, it's the economy, and as I mentioned last week, it's looking rather fragile... It's not going to take a prediction guru now to say that a recession is coming. Well, the central bankers will still insist that everything is under control, but hey... we've seen this movie not so long ago. I even remember the long queues of people at the door of Northern Rock (it used to be a bank in the UK, in 2008...)

Just to make sure we are on the same page, I will start with this picture. The 2008 so-called financial collapse is the little blip on the left. Today's crisis is the monstruous bungee jump on the right 😱 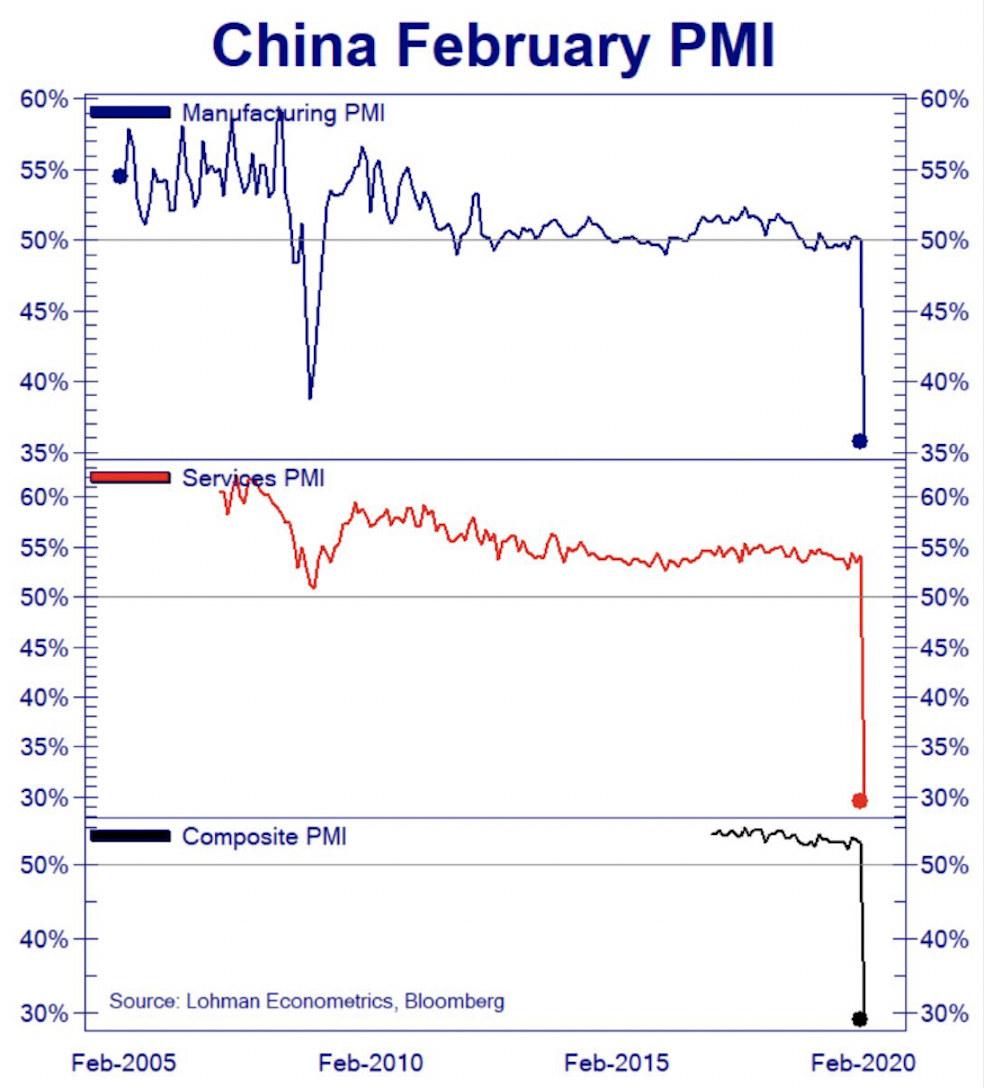 What you see here is a kind of proxy to understand how much the Chinese economy got hit by the first real month of containing the COV19. Don't think it's just temporary bad or just locally bad. No, it's Hell.

I cannot resist, I have to show you this little image... Remember the fear of missing out article 3 months ago? We had a score of 92, extreme greed. Well, we are now in reverse mode with a vengeance!

If it walks like a recession and it quacks like a recession, it must be... I let you finish... Why do you think the Fed decided to cut the interest rate by 0.5% this past Tuesday, totally un-announced and out of their normal meeting? They must have had a hell of a phone call from the King of US... But that was probably not the only reason. No, it's official. We are now in recessing battle mode. All the money printing of the past few months, it was chicken feed. Now starts the real action.

Only one problem! The US is starting the fight from circa 1%. Last time we saw a crisis coming, we were at 5.25%, so we had a bit of ammo. And as I mentioned last week, let's not even contemplate the BCE, which stands at the foot of the recession, at -0.5% 🤦

What does it mean? First, they won't be able to lower the interest rates by much. So they need another solution. As far as I can gather, there are only three: 1/ print like mad ; 2/ tax like mad ; 3/ let hell do its job. it's not impossible that we will have a bit of all, but the 3 solutions don't depend on the exact same people / institutions. Let's explore the scenarios for a moment.

Print like mad: This is the job of the central banks. If we have learned something in the past decades, it's that the central bank cannot help printing money. They will continue to print, that is for sure. It's in their DNA. If we remember the lessons from the 2008 crisis, it means only two things: a sudden loss of value in most assets for a year or two, and then all these assets come back with a vengeance and cost way way more than at the start of the recession. Over the long term, cash is worth nothing. Remember this: over the long term, be invested in assets leveraged on inflationary pressures. So be in cash for now, wait six months, a year or two (no idea it may go faster this time?) and then when you think you will loose everything you have, it will be time to use your cash and invest it in those assets.

Tax like mad: This is the job of the governments. If we have learned something in the past centuries, it's that the politicians (elected or not) cannot help lying. They will always prefer that the central bankers keep the printing press on, so that they avoid having to make hard decisions. And they have two types of hard choices to make. Raising taxes and lowering spending. If the printing press is not fast enough, we are going to get taxes. And if the UK is anything to go by (the past few years have been revealing), you can bet that there will be more taxes on those who cannot evade it easily. That means employees, landlords, and small businesses.

Hell...: This is the job of God 😉. If we have learned something in the past millenia, it's that people cannot help blaming others when things don't go their way. I hope we do not get there, but I fear that this is going to create more extremism, more isolationism, and in a way, more Brexit copy-cat. I cannot see how this will be progress. But I have learned time and time again that human nature is very deceptive, and that when pushed to some limit, people can go back quickly to being animals or even reptiles. Let's hope there are enough good forces in this world to avoid this.

Protect yourself, be wise, and help those who need you.