There is something called Blue Monday, and this year, it hit us on January 20. Mind you, the last 3 weeks, I have done everything in my power to keep you focused, in a good mental state, and plan for the next decade (not just the next 10 days) so that you can avoid Blue Monday, and then the long drag until Easter. So, if you are with me and focused, let's make the most of our good mindset and get some insight into the world financial equation. Errr... if you are already in Blue Monday spirit, I am not sure if what's coming next is the right medicine!

Oh, you wondered what Blue Monday is? Well, apparently it is a scientifically calculated 🤥 day when we generally hit a low motivational level after the new year's resolutions. Mind you, it takes on average 20 days to get bashed on the head by cold weather, taxes, going back to work, and other depressing stuff, such as already not keeping track with the resolutions set a few days earlier! That's human nature, apparently!

Anyway... Now that we all have a mindset of steel, proper plans in place, and a systematic way of converting learning into habits for better execution of the plans, we can contemplate the world financial equation. I hope you are sitting down!

Yes, this is another story of Debt, Assets, and Central Banks in the middle. And of course, a peek into the Crystal Ball 🔮!

Last year, Bill Gates added $22.7b (yes billions) to his wealth. Not by saving on taxes, not by working more... just by "not selling" his Microsoft shares fast enough! Although Mr Gates pledged to give away 99% of his wealth before he dies, although he pours billions into his charitable foundation, he just cannot spend his money fast enough! Money magically recreates itself into the billions. That, my friend, is called Asset Inflation. And this asset inflation does not come from nowhere. In a world of near 0% growth as we have it, it comes mostly from the money printing of the Central Banks, which need to find a place in this world of ever diminishing returns on investment. As a result, asset inflation is leveraged way beyond the Central Bank golden rule of inflation at 2%.

In parallel to this asset inflation on steroids, you have a Global Debt Inflation. To make it short, this debt is made of countries debt, companies debt, and then private individuals debt. Although all of this is a bit of a construct of the mind, because in the end, country and company debts are supported by private individuals paying for services, goods, and taxes. So, the world population has the Global World debt on its shoulder. The problem is, this debt is also growing at a pace well above the 2% ruler.

According to some recent study, the world-debt-to-GDP is approaching 322% (I remind you that the EU treaties consider debt-to-GDP above 60% as dangerous, and that renegade Greece is at 181%). That translates into an amount of $253t (trillion), which for the fun of it, I will round as a quarter of a Quadrillion Dollars 🥳. 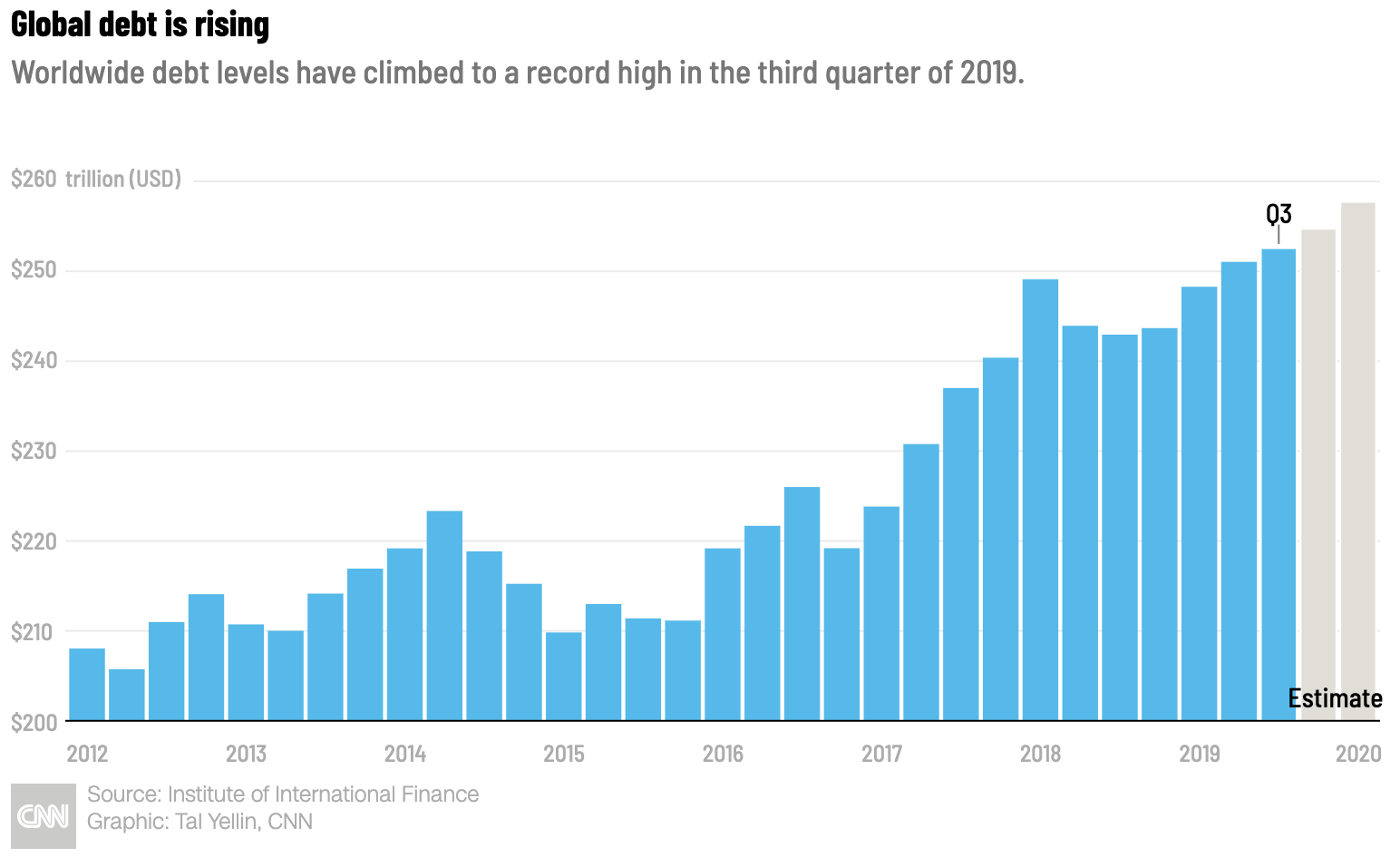 One of the reasons that debt does not stop, is that it is the construct of our (western) societies. Central Banks continue to print (let's round it between friends) in the region of $100b of money per month, and commercial banks continue to leverage a good part of this money, as per their mandate, rights, and greed. With this setup, do not hope for debt getting repaid. Debt is going to continue rising... into the Quadrillion...

What's the conclusion of this story? Well, for me it's becoming clear... The world is put on loan by some mega-wealthy dominators who meet once a year at Davos, and everything they sell is progressively getting SaaS'ed. I mean by this, that in a fast approaching future, we will not buy things anymore, but we will rent them. As our collective debt is making us all more and more capital-poor, our only way forward is to rent things until the next paycheck. Rent a property, OK that's not new. Rent a car, not too new either. Well, rent the car journey then (Uber for all, forget your car). There is still someone at the wheel who owns the car? Ahhhh... make the car autonomous, get rid of the driver, and rent the car journeys, 24/7. This time, it's a pure utility: just rent the journey, available whenever you like (for a fee!).

As a side note for those of you who are registered to this blog, I noticed that some of my posts are prone to be redirected to the spam box. I encourage you to verify your spam box and maybe check if you have not missed any post. So far, I always post an article over the week-end, so if you did not have one, it's in your spam... A good way to avoid future loss of email is to whitelist me as a sender.