Today is Father's Day. And today, for the first time since I started this blog, we have a guest post! 😋 But not any guest post.

When I was young, I was always looking for ways to learn from the older and wiser. My dear Friend, today we have this privilege as we have a wiser person giving us his view on life and money. Just read-on!

From time to time, you meet someone in your life, and you think... Damn, this person is exceptional. I'd like to spend more time with her or him. Whilst to be honest, at other times, you meet other people and think... Damn, this person is toxic and I'd better not stay too close too long! Ha! Ha! life throws everything and everyone at you. You just have to know what to do with it. 😅

Well, Tom is part of the first group. I have known him for around 15 years, but because his life was mostly set in the US and mine was mostly set in Europe, we have only met face to face on too rare occasions. Most of them, I remember well. You cannot meet Tom and forget him. When you meet him, you know right there that you want to capture all his wisdom and remember every moment spent with him.

Well, today we have this privilege, as Tom agreed to share with us a very personal post. Enjoy!

June 21st is Father’s Day this year. I ask for a moment of your time to continue reading, and I will get to the point of this essay eventually, after a shout-out to my father.

My father died in 1974, at the age of 63, and for the past 46 years I have thought of him on occasion but have said little publicly about him. He was born as part of the G. I. Generation (Howe & Strauss, Generations, 2001), got his Ph.D. in biochemistry during the Great Depression (at age 22!); taught at universities in Georgia (and went unpaid for almost a year when the Georgia legislature refused to pass a budget to support the “pointy-headed liberal professors” — some things never change 🙄 — served as a Major in World War II; worked at various hospitals, post-war, directing the clinical laboratories and teaching the nurses. He was an expert in toxicology, but disappointed that his younger son (me) could not pass kitchen chemistry. Oh, well... 🤷

I basically remember him in Waverly, NY, a small upstate town where I grew up, and Dallas, TX, where I finished high school and started college. He made okay money (never more than $20,000/annum), enough to support his family. He was never good with money, and he never invested in the stock market. I think it was common in his generation to avoid that level of risking taking. They had endured the Great Depression, WWII and its deprivations, and had a cautious attitude. In Waverly, I do not remember ever wondering “what the stock market did today?” In Dallas, I am fairly sure that there were more risk takers (it was Dallas 🎵🎵 after all), but I did not run in those circles.

To me, looking back, this was the backbone of the United States. The average family would use savings accounts or other safe investments to provide for the retirement years, while providing the capital for those who wanted to take risk to do so for a price. Families received a fair return on their investment, safely protected. While they did not make mass quantities of money, their savings did manage to slow the evil of inflation. The plan was that those savings, coupled with company pensions, Social Security and the newly enacted (1965) Medicare Act would protect them when they retired from the workforce.

If I flash forward 60+ years, the backbone is suffering from a severe case of osteoporosis. I believe that the financial community has succeeded in transferring risk away from themselves to Main Street Yet they alone seem to be gaining the profits from the transfer.

For example, the shift away from pensions to IRAs and 401(k)s, and the like, has allowed the financial community to shift risk from themselves (as Pension Managers) to their clients (Main Street). No matter how the market goes, they earn money because most of the money is invested in mutual funds that they manage. Sure, they risk having people pull their money, but how often does one truly drill down to inspect what is happening — even if they looked through the mind-boggling prospectus.

Another example is the continuous demise of the interest rate. A look at the 30-year LIBOR rate shows that the trend has been downward since 1988. 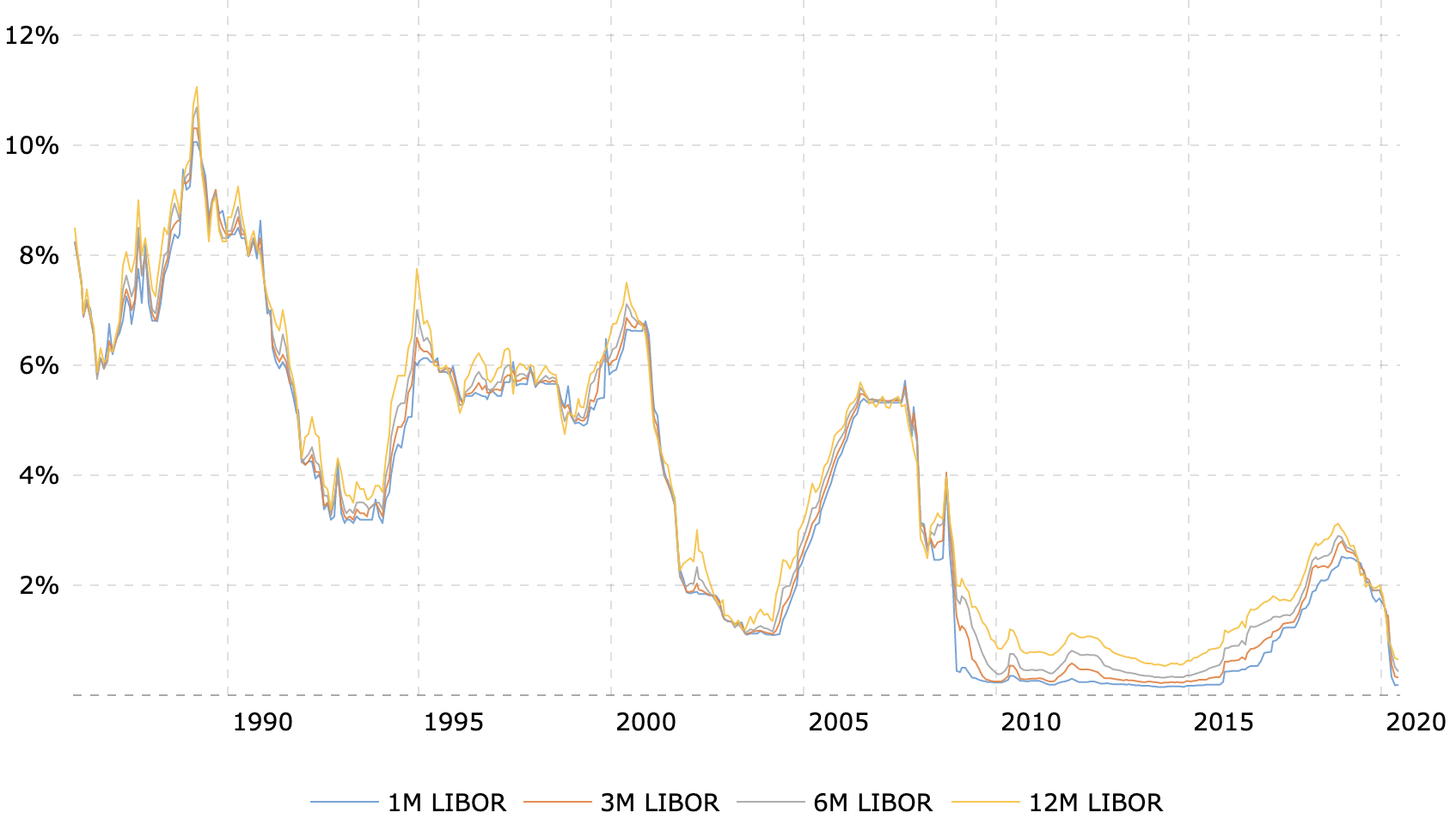 This does not help Main Street, but it most certainly helps Wall Street. Cheap money (almost free money recently) allows borrowers to make their money without sharing it with the people whose money they are using. Or, if in desperation, Main Street attempts to shift money to the market to try to make up for the stagnant interest rates, they are charged for the privilege (unless they want to get even riskier by investing in questionable schemes directly). Just recently I noticed an article that said that billionaires in the U.S. had increased their wealth by over $500 billion just since the beginning of the Coronavirus pandemic — five months ago! I wonder how much of that is from playing with other people’s money.

Even the tax code in the U.S. has hasten this process. The reduction of tax rates for business has ballooned the Federal deficit (not counting the mass quantities resulting from the pandemic). This cannot bode well for Main Street. I am a supporter of Keynesian economics, but even John Maynard would say that this kind of deficit is too much. I lived in and visited Greece for many years after leaving the Air Force, and I saw what a 90% decline in a currency over a 28-year period can do (the drachma in 1974 was 30Δρχ:$1.00; at the time of the change to Euro, the ratio was roughly 300Δρχ:$1.00). At the same time, the value of the dollar declined by 265%. Let me illustrate the true loss in buying power: If 1974 is the base year, the 30Δρχ of that year’s value would take 2650Δρχ to purchase the same value of goods in 2002. That is an 8833% inflation rate.

The upcoming Financial Simulator is powered by intheRatRace

What caused this? Greece’s government vastly spent more money than it had received in tax receipts. It is not 1920s Germany, but it eventually pushed the Greeks into near bankruptcy.

Can the U.S. be far behind?

President Trump claims he wants to make America great again. Setting aside the impression that he couldn’t pour pee out of a boot with the directions on the heel, his minions in the financial arena seem hellbent on continuing some sort of “trickle down”, supply-side economics that has never worked. It did not work for Ronald Reagan. The correction of that mistake cost George Bush Sr. his second term. The financial stability that George Bush Sr. helped secure gave Bill Clinton two terms with balanced or near-balanced budgets and a solid economy. George Bush Jr. coupled vast spending on war (a la LBJ) with another wide-open financial free-for-all that ended with the Great Recession that took Barack Obama eight years to come out with the last six years fighting a hostile Republican Congress. Now we have the Trump Administration’s attempt at unfettered business.

Well, in truth, We have met the enemy, and he is us (Walt Kelly’s Pogo, Earth Day, 1971, meant for environmental concerns, but it fits our current financial concerns, too). I wonder what my father would think of all this...