Welcome to the weekly review. In case you like reading this review, could I ask a favour?
Each week, forward my email to another friend of yours who could benefit from it.
wealth

How to juice an apple

As its name badly indicates, the S&P 500 Energy index contains... not 500 but 28 companies. Still, you find in there the largest US listed companies providing energy to more than 300 million people, such as Chevron, Exxon Mobil, and another 26 peers. Why bother you ask? Well, this week, one company alone got worth more than the entire energy sector in the US. This company is called Apple.

Get my weekly reviews to your mailbox at the end of each week.

You will never have enough education. Here I share my views of the financial market in general, and from time to time, how to profit from it.

If you like the content of this blog, make sure you read Out of the Rat Race, the book as you will find many eye opening facts and stories which I gathered over 25 years of learning.

Yes, this week we are back to financials with a vengeance! No kidding, how on Earth can this be possible? I don't like to bore you with numbers, but there is another important lesson waiting in there... So we need to dig deeper. Look at this graph below. This is the net profit made by Apple (AAPL) in the past 5 years, quarter by quarter. 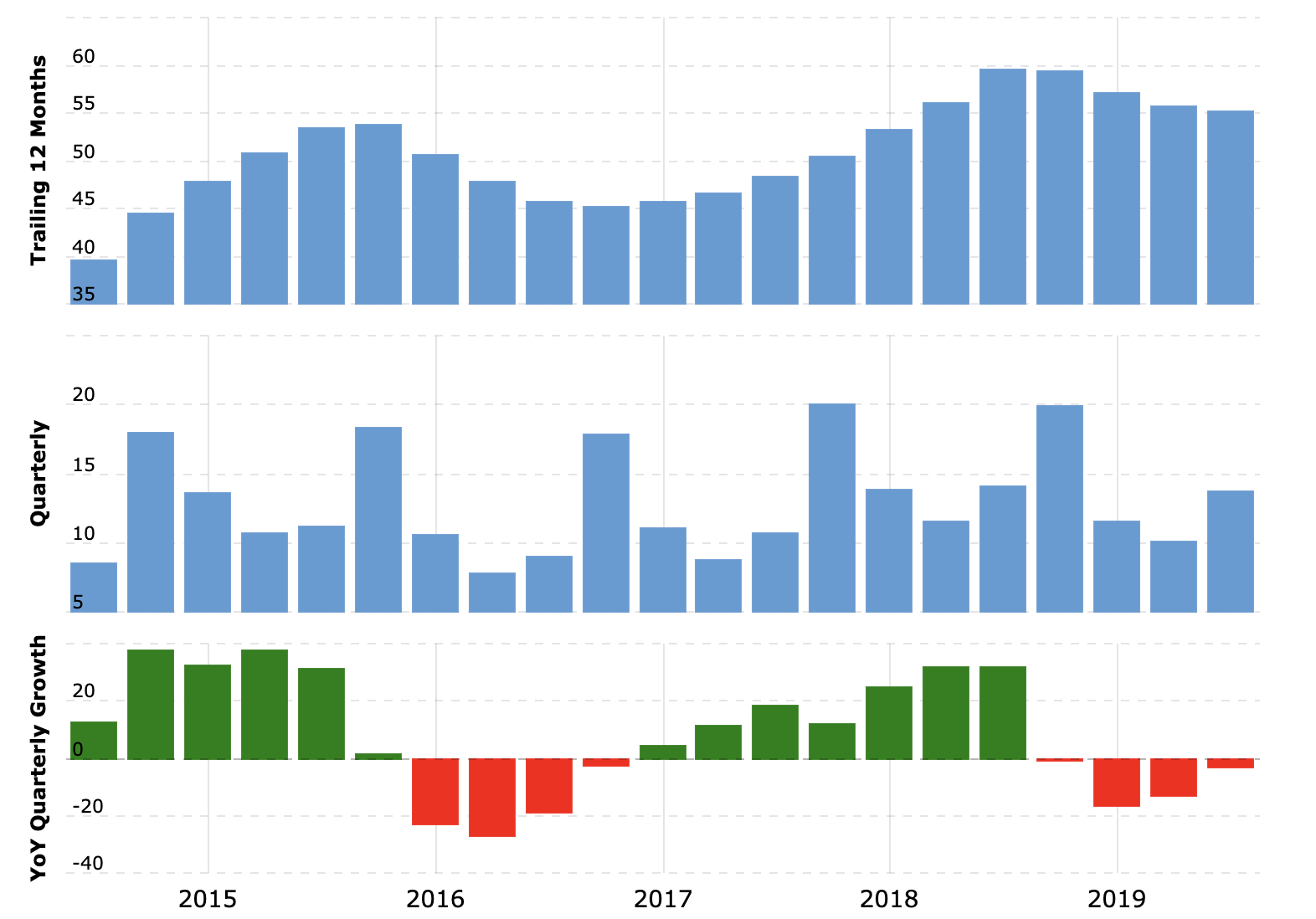 Basically, growth, dip, growth, and dip again. We are now in the dip again phase, with decreasing profit quarter after quarter. You take the total revenue, it's more or less the same story. In any angle you look at it, the short term prospect is no growth, more dips.

In this condition, you would expect the AAPL stock to have a difficult moment. Could not be farther from the reality. The stock is up 66% in the last 12 months. 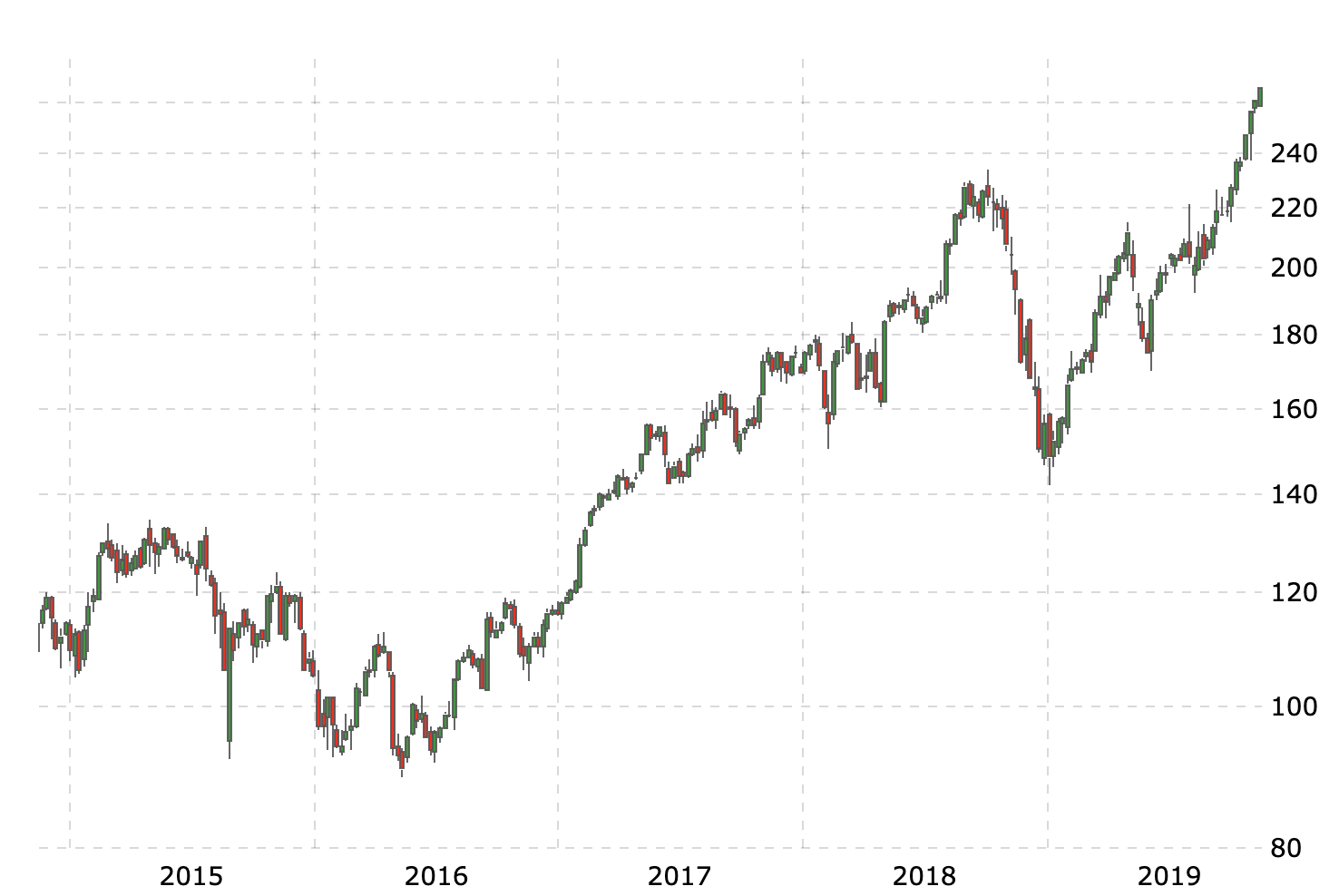 You may remember, we already talked about this disconnect between financial growth and economic reality recently. The reality is that Apple is buying back a massive amount of its own stock. By buying in the region of $20b of AAPL stock per quarter, Apple is coming closer and closer to the role of a Central Bank: printing money (in the form of overvalued AAPL stock).

Look at it this way: the ECB has a money printing program of €20b per month, with which they buy-back Eurozone country debt (pro-rata of the Eurozone policing, the big countries first). Then, when there is not enough such debt to buy (may I remind you that the big countries offer negative interest on the debt), they end up buying large European Corporate debts.

Although with Central Banks, you never know the real intention, let alone the real final impact, one would think that the ECB's probable intention is to replace non-existent economic growth (less than 1%) by financial engineered growth in order to diminish the impact of the upcoming recession (when growth will turn negative). So they focus their attention (they splash their money!) on the following priorities:

Well, Apple buys back $20b per quarter of stocks at their highest valuation, which they then burn. Sorry... the right word is cancel. So they cancel their stock with the probable intention to replace non-existent company growth (sales, profit, or other good KPI) by financial engineered growth in order to improve the growth of their company's value despite no growth in activity. They focus their attention (they splash their money!) on the following priorities:

Apple plays the financial game to its maximum. This past few days, they issued €2 billion of Euro denominated bonds, over 6 and 12 years. The 6 years bond will pay the investor the pricey interest of... zero percent. Well, why bother paying when you have the ECB who does not know what to do with their newly created money?

We live in a world where money is not what it used to be... There are zillions of money out there. Only it is concentrated in financial engineering machines such as AAPL, which makes nearly $3m of revenue per employee. Central Banks never lose, they can always print money. It looks like there are a few select companies in the world which have reached a Quasi-Central-Bank status, and can never lose: in bad times, they print their own money, and get 0% interest loans on a couple of €billions.

If Apple was an industry, it would be worth the entire US Energy sector. But if it was a country, you could evaluate it in two ways. In terms of Sales = GDP (value of the company's activity), Apple is like Finland (the Telco country), and would rank in the top 50. But in terms of total wealth (value of the company's worth), Apple is like Norway (the Energy country) and would rank in the top 30.

Learn from Apple. With financial know-how, they managed to disconnect their value from their income.

Click here to forward this page to a friend of yours who could benefit from it!