Welcome to the weekly review. In case you like reading this review, could I ask a favour?
Each week, forward my email to another friend of yours who could benefit from it.
money

Anything can happen for those who have the patience... Well, it's what I like to remind myself of when things don't turn as planned...

Anyway, we have waited enough for this... And I feel that we are ready for it too 🪂! Let's dig deep into this EuroDollar mystery...

The EuroDollar... What a badly named concept...

Get my weekly reviews to your mailbox at the end of each week.

You will never have enough education. Here I share my views of the financial market in general, and from time to time, how to profit from it.

If you like the content of this blog, make sure you read Out of the Rat Race, the book as you will find many eye opening facts and stories which I gathered over 25 years of learning.

The EuroDollar has nothing to do with the Euro, and was created long before the Brussels zealots asked themselves how they could name their common currency, which for a long time was going to be called the ECU. Maybe they kept the ECU for when the Euro has to be replaced after armagedon?? Anyway... let's not get too distracted... The EuroDollar has nothing to do with the Euro but still everything to do with the Dollar. It is just the name of all those Dollars either in circulation (cash) outside of the USA, or stored on a bank account outside of the USA, or any Dollar denominated debt owed by anyone (individuals, corporations, countries) not based in the USA. Basically, the EuroDollar is the name of the US currency which is used by the world, but is not located in the US. And guess what: it's big!

We recently reviewed that the M2 (the Dollars in circulation in the USA) are weighting a little bit over $18 trillion. And we also put into perspective the newly $3 trillion printed by the Fed in the past 3 months or so. Well, the EuroDollars has a weight which seems to be difficult to estimate, as some of it may not always be declared 😮. One source puts it a $57 trillion (however including more complex instruments than just cash such as derivatives and imports). Another source puts only the EuroDollar debt at $12.2 trillion (does not include the USD cash nor the USD in foreign bank accounts). And another one puts the same EuroDollar debt sitting in Non-American banks at $18 trillion. As we can see... we cannot see shit in there!

Anyway you look at it, this EuroDollar market is mired in secrecy (secret foreign bank accounts?). But very certainly, it is bigger than the size of the money in circulation in the USA.

And because it's that big, and because it is used by those who will not be first in line for getting the Fed's lifeline when it comes to it, it has the explosive potential of being as close as we can get to the real money system of the Planet. Indeed, when you ask what money is, in fact you should ask: what is the EuroDollar and how will it shape future money?

To get closer to answering this question, first it is important to recognise that a lot of the Debt in the world (mostly taken up by countries and corporations) is still taken in USD. For example, Turkey has a debt of around half a trillion USD. Which is in fact, half a trillion of EuroDollars (these Dollars not located in the US). Other countries have similar problems too... Mexico, around $650bn ; Thailand, around $225bn ; South Africa, over $80bn... just to name a few. In fact... Most "poor" countries have raked huge debt in EuroDollars, courtesy of the IMF helping them take on debt in USD... 😇

Second, it is also as important to recognise that those who lend Dollars are also mostly based out of the USA. Therefore if and when they lend Dollars to countries or corporations not in the USA, they in fact lend these EuroDollars. For example, no surprise here, the first saver of them all is China with over $3.2 trillion of USD cash (where do you think your cash from Amazom purchases go to?) ; and then you have other savers such as Japan (converting electronics into USD) with $1.3 trillion ; Russia, Saudi Arabia (converting oil into USD) with a combined $1 trillion, Switzerland (converting... chocolate??? 🤔 hummmm... maybe secrecy of offshore accounts 🤫 into USD) for around $850bn, etc...

Now, it will come as no surprise if I state that borrowers would like to borrow at a very low interest rate (as close as possible to zero) whereas lenders would like to earn more than zero (a lot more?) to cover their risk and their ageing population 🤭. But the interest rate is initially based on the Fed rates, which is set in and by the USA. It is not in the control of all those countries making use of EuroDollars, both savers and borrowers.

Let's do a little bit of Math for a 10 year old for a minute. Let's assume a likely EuroDollar denominated global debt at $20 trillion, just because it is a round number and probably not too far from the reality. If the interest rate to repay each year on the debt is set very close to zero, the additional burden for all those debtors is also very close to zero: not much pain. Now, let's put this interest rate at 2%. Suddenly, it means that $400 billion of EuroDollar is needed every year. And this is just to pay the interest on the debt. Not even starting to repay the debt itself. If the interest is 6%, then it requires $1.2 trillion in a year. You get the idea...

If we follow this logic to the end, it can become... scary.

The picture we are provided by the scaremongers (and it looks like I have been one of them before I discovered these EuroDollars) is one of the Fed printing to Da Moon, and therefore risks of hyper-inflation.

In this light, this money printing looks totally unreasonable and like we are going to hit zimbabwe inflation soon. Mr Fed Manager, please STOP this now 🙏!

Think about it this way for a few minutes, hours and days. It may change the way you view the World of Money. There is just not enough Dollars circulating outside the USA to pay back the interest on the debt that all these countries and corporations have taken on for the upcoming decades. Unless of course... we live in a permanent world of ZERO interest rate ✨.

Now of course, the main problem remains the circulation of this money as I discussed in the Velocity of Money. Because at the moment, a lot of the printing of the Fed ends up chasing the price of 5 stocks. Well, for the rounding story here, I give you 7 stocks weighting altogether $7 trillion, or around 35% of the entire GDP of the USA, pre-Covid. I mean wait another two weeks, add Tesla in there, and we will hit the US GDP post-covid with just 8 stocks. Maybe we should ask Apple and Facebook to run the country? Or maybe we should not ask but they will anyway... 🤭 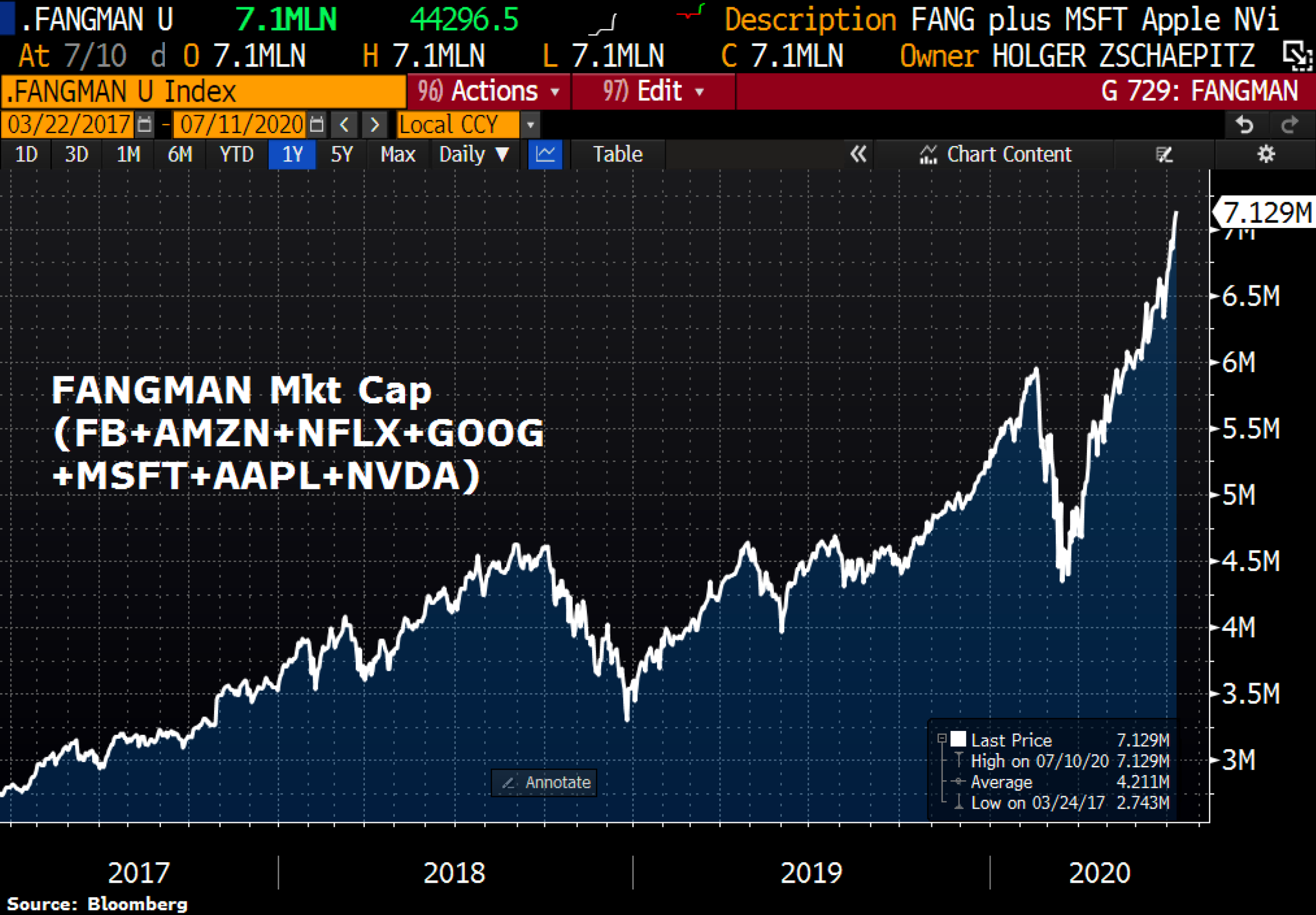 You see, the Fed can still print more... 🤑 because if it only ends up here, it does not help the economy very much! It just creates a few more billionaires who will buy more fancy stuff... Hummmm... Looks like I went sidetrack again... It's hard to pretend, like the Fed Manager does so expertly, that there is no elephant and not seeing it when it just takes all the space and stares at you all day...

Anyway... back on track! Frankly, the more I look at it, the more I believe that our collective future will be decided by the Fed, and then by the reaction of the EuroDollar market to the Fed's actions. To be continued...

Click here to forward this page to a friend of yours who could benefit from it!